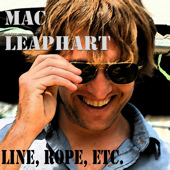 Mac Leaphart’s solo record, Line. Rope. Etc., is a songwriting tour-de-force, with tunes that draw from the best of the country-folk tradition (think Kristofferson, John Prine, Gram Parsons), and a few times allows himself to slip into the comfortable sweet spot between Southern rock n’ roll and pure honky-tonk bliss.Â  As a songwriter Leaphart sticks fairly close to time-tested country music topics, but somehow the songs end up feeling entirely evocative and original at the same time.Â  The best tune on the record is “Confederate Roses,” which meanders its way through the story of a husband to-be murdering his fiancÃ© and her lover.Â  The song, written from the perspective of the killer, is so full of regret and understanding that it takes something wholly archetypal and makes it new.Â  Here is the first verse, which is a textbook example of how songwriting can tell so much with so few words:

When I stood at the altar, I’d lived half a life

And she was too young to be any man’s wife.

She had a wildness that I couldn’t tame

And all I had on her was my family name.

And I watched as she watched him with her eyes burning wild.

And I knew I could never give her that smile.

She was so restless, so I pretended not to know.

But it just kept at me–lord, I couldn’t let it go.

Elsewhere Leaphart utilizes the talents of his good friend and SC folk legend Danielle Howle, who contributes urgent harmony vocals on the lovelorn opener “No Way,” and an elegant twang of the country duet “Cold Hard Truth.”Â  The latter opens with the line “you could write a book with the words we wasted,” and even though you know where the rest of the song is going, you can still bask in the gorgeousness of the two’s voices and the understated pedal steel that bolsters the tune.Â  The song’s musical and lyrical cousin is a tune that Leaphart sings with much more bravado, “White Line Mercy,” a honky-tonk lament praying “lord have mercy on the man whose woman loves cocaine,” a line which tenderly changes to “lord have mercy on that little girl who loves that goddamn cocaine” at the end of the song.

Throughout the record Leaphart shows a deft touch in his evocation of all things Southern–screen doors slam, old men brown-bag whiskey, and we’re all trying to get saved after partying a little too hard the night before.Â  If those things don’t make you ache a little bit, you are gonna have a hard time convincing anyone you have a Southern soul.Â  Come out for the singer/songwriter showcase (featuring Todd Mathis of American Gun, Zach Seibert, and Rob Lindsey) at the White Mule on Feb. 12th, or just download the guys record (he gives it away on his website) to see what I’m talking about.