From a cover of Springsteen’s “Thunder Road”’ to fingerpicked ballads, Friday night’s show at Charleston Music Hall proved everything Drew Holcomb had to say in our interview. Looking like he had just hopped out of the album art with his cream fedora and black suit, Holcomb walked on stage, picked up his guitar and started the set with “American Beauty.” The song was the first single from the band’s latest album, Medicine, and begins with Holcomb singing, “She was a good companion, eyes like the Grand Canyon, she was an American beauty.” Garnering the crowd’s approval with claps and yells, Holcomb transitioned smoothly into the song, “Tight Rope,” yet another song from Medicine. And it was only after “Tight Rope” that Holcomb finally broke the stoic look on his face with some comedy. “Someone stole my guitar stand … whoever it was come forward,” he said.

Only two songs in, it seemed that Holcomb wasn’t kidding when he said more than half the set list was from Medicine. Nine out of the 16 songs last night, excluding the two encore songs, were from the album. But to my surprise, he dusted off a song or two from the band’s 2013 release, Good Light. The crowd instantly reacted when guitarist, Nathan Dugger, played the familiar, distorted riff to the song, “Good Light.” And not only did Dugger surprise me with the collection of guitars he used, but the exactness of his tones. Whether he was playing his orange and cream Telecaster or the pitch black Gibson seen in music videos, every song sounded like it was coming directly from the album.

It wasn’t long after the beginning of the set that Holcomb slowed things down and introduced the song, “I Like To Be With Me When I’m With You.” Playing behind a backdrop splattered with LED lights looking like stars, Holcomb started picking the guitar and said he didn’t want to be “that guy” to write a song about a girl. “You know the guy sitting around campus playing John Mayer songs,” he said. But as the song started, it became apparent that the song was exactly that, a simple love song with a simple story. And that’s what has made Holcomb’s music so popular since his arrival onto the music scene in 2005. Worth noting, Holcomb switched the lyrics to the song for the crowd and sang, “If I could live on the moon, I would rather stay in Charleston with you.”

Holcomb and the crew pushed onward into the set with three more songs from Medicine, but quickly transitioned into one of the night’s heaviest songs, “Fire & Dynamite.” The song is featured on the band’s 2011 release, Chasing Someday, and was probably one of the best songs I’ve seen performed live. And while Holcomb and the band played their hearts out on this song, it just didn’t fit the venue or the set list. If anything, the song should have been put at the end of the set list as a possible encore performance. Of course, they could have thought it would break the tension in the venue and get crowds on their feet.

One of the highlights of the night happened directly after when Holcomb started telling the story behind “You’ll Always Be My Girl.” Holcomb began by saying that he and bassist, Rich Brinsfield, had been playing music together for a long time. Only then, a fan from the back of the venue yelled, “What?” Holcomb chuckled and restated what he said before. But before the song began, Holcomb looked out into the crowd and jokingly said, “Smart ass.” It was the little interactions with crowd that made the show such a success on Friday.

One of the many interactions happened when the band stepped off stage and Holcomb asked the crowd, “Is it alright if I play a couple of songs by myself?” From the amount of noise coming from the crowd, it was apparent that he was more than welcome. After one song, Holcomb stepped away, unplugged his guitar, and stood directly above the front row. With the spotlight shining down on him, Holcomb stopped to say that he loved South Carolina, but that he was from Tennessee. A couple of “Go Vols!” rang throughout the venue, and Holcomb began to play “Tennessee” from Good Light.

The band soon returned and began to play “Thunder Road.” And I would dare to say that Holcomb’s rendition was better than Springsteen himself. Transitioning into the song, “Here We Go,” Holcomb told the crowd to sing back to him as he yelled, “Oh yeah alright, trying to make sense of it all tonight.” The crowd continued the call and response until the end of the song and watched the band walk off stage. However, the applause continued and Holcomb returned for a small encore of two songs.

Throughout the show, Dugger never played the riff that all Holcomb fans are familiar with. It seemed that “Live Forever” had been forgotten in the midst of the new album. But sure enough, the band began to play the song and the crowd, standing on their feet, sang with Holcomb as he closed the night out. Overall, the show was one of the best I’ve seen in Charleston. Whether it was Holcomb’s humble thank you after each song or the hum of the acoustic guitars, this show was one that many will never forget.

I Like To Be With Me When I’m With You

When It’s All Said And Done

You’ll Always Be My Girl

What Would I Do Without You 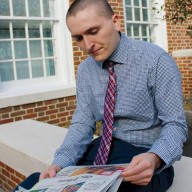 Andrew is a fourth year journalism student at the University of South Carolina. He has written for Deep South Magazine, 85-26.com, and a variety of other publications. Follow him @mooreap2 to keep up with the latest music news and more.