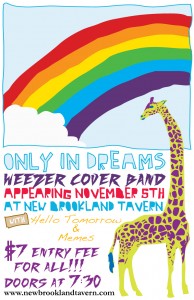 This Thurdsday night at New Brookland Tavern, Ben Walker Radio will take the stage as Only In Dreams, a tribute to the once great Weezer.Â  Ben Walker and company are no stranger to paying homage to Weezer in their sets, often covering parts of Surf Wax America.Â  This show will take it to the next level featuring songs from The Blue Album and Pinkerton and surely some Weezeresque guitars and maybe some black horned rimmed glasses??Â  We’ll have to wait and see what they pull out of the bag.

Hello Tomorrow has been known to play a Weezer cover or two in their time, but Thursday night they will take on Pavement.Â  They plan to focus mainly on their album Brighten the Corners .Â  Hello Tomorrow should seriously consider playing “You Gave Your Love To Me Softly” if Only in Dreams doesn’t plan on playing it.Â  Just saying…Â  HT drew my attention years ago by playing that song.

I’m totally considering busting my Weezer hat out of hiding for this show, and I’ll definitely be wearing my sleeveless Weezer Tee.