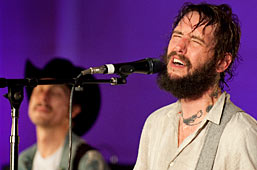 I still haven’t fallen in love with the new Band of Horses songs, but I try a little bit everyday.Â  I’m not sure how you blow up all over the world with arguably your worst album, but the marketing behind them lately has been phenomenal.Â  They’ve been everywhere doing everything and are a complete product now.Â  They’ve even got a song on the new Twilight Movie soundtrack.Â  Not saying that’s a totally bad thing, we’ve all got to make a living.Â  They even address the issue of “selling out” in the interview.

In these videos featured at Spinner.com who is part of AOL, the Charleston, SC rockers played New York’s Grand Central Station just hours after flying in from Denmark.

Head on over to Spinner to check out another video and interview from the performance.