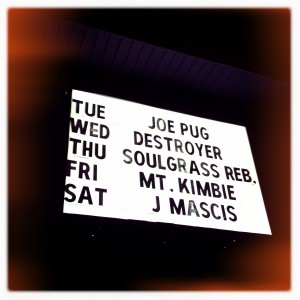 Destroyer in Asheville was a night of firsts.Â  It was the first time that I’ve been to The Grey Eagle, it was the first time I ate at Jack of the Wood and encountered the “Green Man”, I got to meet a lot of cool new people and it was the first time I’d hung out with one of my best friends since our falling out a couple of months ago.Â  You see, we just got in such huge arguments about the new Destroyer album Kaputt that we just couldn’t stand to talk to each other anymore.Â  The only thing that could bring us back together was Dan Bejar and his awkward self. The trip started with a beautiful windows down drive up to Asheville.Â  The only crazy thing that happened on the way is that I almost ran over a ladder in the middle of the interstate.Â  I just got new tires before we left and I nailed that thing.Â  Luckily no damage was done.Â  We did a lot of walking around downtown Asheville and met some friends at Jack of the Wood, which is a cool Irish pub that I would definitely go back to.Â  One of the guys that we ate with works at a coffee shop in Asheville and served Dan Bejar a cup of joe earlier in the day.Â  He also got a free hug from the man who is a solitary Canadian myth.

Turns out that three of the people that we were eating with were from Macon and were friends with The Blue Indian, especially Sean Pritchard.Â  We all bonded over good music, the South and an Irish delicacy, which was a boiled egg wrapped in sausage, deep fried, cut in half and covered in mustard.Â  I promise, it was delicious.Â  Be more adventurous and order that if you ever see it on menu. 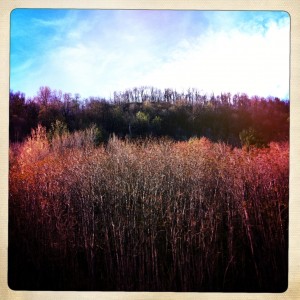 After dinner we all headed over to The Grey Eagle just in time to catch The War on Drugs.Â  This felt like a hometown show for them and was also the first time I really got a chance to check them out.Â  They said it was good to be home, but they were from Philly.Â  I’ve learned that Asheville and Philly have a weird connection and they share a lot of bands. I listened to The War on Drugs a little bit online before the show.Â  It was just enough to know that I would enjoy their set.Â  They were seriously like modern day indie rock Bob Dylan. 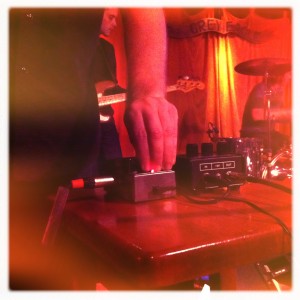 Their set seemed to go by really quickly and then it was time for Destroyer.Â  Destroyer is Dan Bejar, but that night his band kind of stole the show.Â  I really couldn’t imagine them recreating the subtleties of Kaputt live, but they did it masterfully.Â  We were on the front row directly in front of the trumpet player who played with two mics, two guitar amps and two guitar pedals.Â  I’m thinking one was a delay pedal and one was a distortion pedal.Â  Also in the band were two guitar players, drummer, keyboard player and a saxophone player.Â  Is that 8 people?Â  Oh yeah, bass player.Â  At some points they had two bass players and it made the hair on my arms stand up and must have been a pleasure to every girl in the crowd. 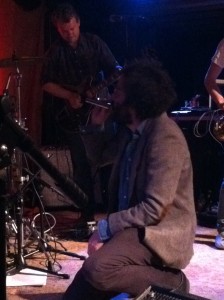 One of the most amazing parts of the set in addition to their perfect sound was Bejar’s religious drinking habits.Â  He seemed to have it all figured out.Â  He was accompanied by a 6 pack of Yuengling and a flask which he drank from after every song.Â  I kept making awkward eye contact with him and it was like staring into the eyes a manic person.Â  Each time I couldn’t help but look away quickly.Â  He was little for stage patter.Â  The only time he talked to the crowd was before the very last song and that was to thank the opening bands.Â  Everything else was singing and drinking.Â  Well, and at times he had printed out his own lyrics to read on stage. 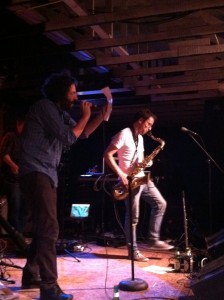 My two favorite moments of the night were “3000 Flowers” and the “Bay of Pigs” encore.Â  The set focused mainly on the new album, but fans were excited to hear a couple of oldies.Â  Oh, I think my favorite might have been “It’s Gonna Take an Airplane.”Â  Your Blues is my favorite of his albums to date.Â  The “Bay of Pigs” encore was really just an amazing treat though.Â  I didn’t think they would be able to pull off that song live.Â  It’s recorded so much like a stream of consciousness song and live it took a new life.

It was a really amazing night.Â  One of my favorite concerts ever.Â  The long drive home was reserved for long talks.Â  If you are the passenger on a road trip, try not to fall asleep.Â  It’s rude even though I’ve been guilty of it at times.

Racheal came away with the setlist pictured below and a limited edition vinyl.Â  I’m not sure the night could have been topped. 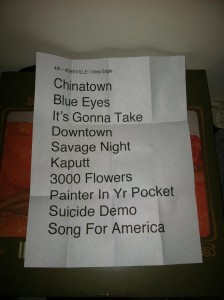 Savage Night at the Opera

Painter in Your Pocket