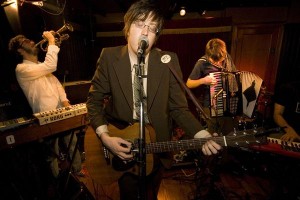 This band is absolutely amazing. Go and see them, you will experience no disappointment. If you haven’t heard of Okkervil River you are a very unfortunate being. They have 6 albums, the most recent I Am Very Far came out a few weeks ago and hit #32 on the Billboard, which is their highest charting yet. Not only that, but it’s an excellent record. I have everything from their third full-length onwards, and I would highly recommend all of it. They have so many songs that could work in a live setting such as slow songs like In A Radio Song or powerful numbers such as The Valley.

The tour for I Am Very Far is starting on Tuesday May 31 in Atlanta and it goes all the way to June 28 in Lubbock, Texas. You can see those dates at http://www.okkervilriver.com A large number of the dates are sold out so if you’re thinking of going to any of them, GET ON IT. I’m going to be attending the Carrboro show, which is sold out, but their first Atlanta show isn’t, so get your tickets. I promise you that you won’t be disappointed. They have some great openers for this tour as well, such as Titus Andronicus and Future Islands. Both of these bands promise a killer live show.

If you’re near any place that this show is happening, go. You won’t regret it. It’s not that expensive. You have no excuses.