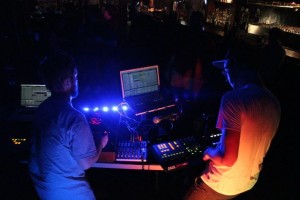 Describe your music for those who aren’t familiar.

We Roll Like Madmen is a vocal-centric, cross-genre electronic dance project. We perform original material as well as remixes, combining both live band and DJ techniques. In addition to our original sets, we also perform as a DJ outfit.

We are all DJs at WSBF FM Clemson, and we listen to new music constantly. This project pulls inspiration from electronic dance genres including house, trance, glitch-hop, and duckstep while emphasizing an element of songwriting kin to Baths, Miike Snow, The Flaming Lips, and Ben Gibbard when he’s sad.

The Clemson music scene is very small which is nice because its easy to form relationships with a lot of the key players around town including artists, businesses, and promoters. However, it can be hard to book events with establishments during the football season. Also, there aren’t any true venues, just bars without proper PA systems or stages. We play occasional house shows, and we’d love to play more of those. Most of our success has come from more electronic-friendly markets that have reached out to us like Greenville and Atlanta.

How did your band get started?

We had audio classes together and discovered mutual musical interests. Each of us have been involved with different musical projects before and were looking for a musical outlet. We first performed as a group for Jordan’s solo project. We wore ridiculous costumes and starting playing with different controllers. After becoming roommates, we started writing songs together focusing on dance music.

This Fall we’ve introduced lights into our performances and are looking to start using projected visuals. We have a few shows left this year including a busy New Year’s Eve, but we plan to focus on writing and recording new material this winter, working towards a southeast tour in the Spring.

If you could change one thing about the music industry what would it be?

How could you pick only one?

Who are some of your favorite South Carolina or Regional bands to
play with? What band do you think your fans should check out?

We’ve had great shows with Dark Room, Tricil, and Chief Acid Officer in Atlanta, including being a part of Nophi Records’ Nophest this last Summer. Unfortunately, we haven’t had the opportunity to play with many South Carolina acts aside from Vampire Pimp, and this will be our second show with Signs of Iris. There are plenty of regional acts that inspire us like Octopus Jones, Today The Moon Tomorrow The Sun, and Culture Prophet. We hope to play more shows with South Carolina artists, though we’ve had some trouble finding many that are stylistically similar.

Moogfest. Hopscotch was awesome, but Moogfest had a greater variety of acts that we’re into like Amon Tobin, Dan Deacon, Crystal Castles, Passion Pit, TV on the Radio, Baths, Tobacco, and M83. We also enjoyed playing with the Moog synthesizers and staying in the mountains of Asheville.