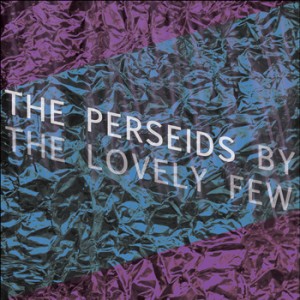 Who: The Lovely Few, with Dylan Dickerson, Ben Walker (Rejectioneers), Those Lavender Whales

Just one year ago The Lovley Few were releasing their first full length album “The Limited Abilities of Man.” While that album was in the works for a couple of years, Mewborne had begun writing “The Perseids” before the release of The Lovely Few’s first album.

“The Perseids” was recorded summer of 2011 at Archer Avenue Studios and moves more into the ambient electronic area of indie than The Lovely Few have visited in the past. “The Limited Abilities of Man” touched on drums machines, but was equally organic featuring acoustic guitars, drums,banjo and horns. This time around the songs are just as intricate and delicate, but in a darker atmosphere.

“The Perseids” is The Lovey Few’s first installment in The Meteor Series, each track referencing The Perseids meteor shower associated with the comet Swift-Tuttle. With the program advising of David Sease, Mewborne and crew are wildly successful at creating a dark drifting atmosphere for the listener.