by Rupert Hudson
in News
0 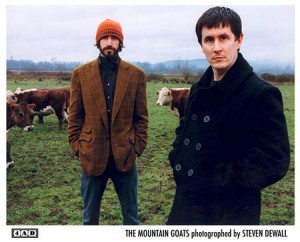 The Mountain Goats are a band who have been around for a whole number of years, playing shows all over the world and at a whole number of festivals. They’ve released so many albums on so many record labels and they are still going at it. On January 31 they bring their impressive live show to one of the best NC venues, the Visulite Theatre in Charlotte. Nurses, their openers, are a band from Portland who are on Dead Oceans record label. They have toured with The Tallest Man on Earth and released their third album last year.

For this tour, The Mountain Goats have mentioned that they are going to be playing a whole of unreleased and unrecorded material as it is something that they don’t usually do. They say it’s something that they are usually wary of because of live recordings but they wanted to try something new. I’m sure they will play a whole lot of material from their back catalogues as well. It will be a great show and it’s in a great venue so you should probably go check it out.

First Thursday at Tapp’s, From Here to Mississippi