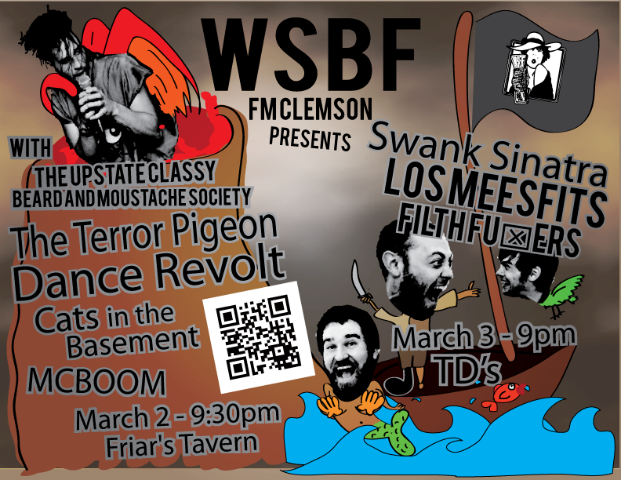 This Saturday, March 3, WSBF will bring punk rock back to Pickens County with Swank Sinatra, Los Meesfits, and Filth Fuxers taking the stage at TD’s of Clemson. Open to members of the public ages 18 & up, this will be a free show with no cover charge.

Flagpole Magazine of Athens, GA, calls Atlanta band Swank Sinatra a “funky and energetic riff-heavy rock trio.” With a nod to Red Hot Chili Peppers circa Uplift Mofo Party Plan, “Who Do You Trust”–from the recent full-length El Terrible–maintains a smooth groove in the midst of an otherwise loud, fast and hard-hitting song. Although it’s certainly not traditional punk, I expect Swank Sinatra to pacify even the most vicious among Sex Pistols purists.

Los Meesfits, a second group out of the Peach State, is a Misfits cover band. (Surprise!) Themselves a product of the vibrant scene in Athens, Los Meesfits are faithful to the original in name only. They put their own twist on Misfits standards with Spanish lyrics and “set them on fire with a salsa beat.” The novelty alone should be worth checking out, but there’s a good chance of serious dancing when that wears off.

Appearing in the Upstate for the first time, Filth Fuxers, led by Clemson student Garrett Burke, is arguably the most punk of the three bands on the bill. Their demo tracks brim with the cocky sound of chicks freshly-hatched in an incubator of Viloent Femmes and The Clash. Check out the track “Take Me to Jail” on SoundCloud.

TD’s of Clemson is located on the corner of College Avenue and Old Greenville Highway, in Clemson, SC. Doors open at 8:30pm.