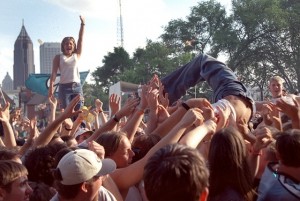 After parading across the country to see music festivals this summer, there is finally a fest that is close to home. It’s not as massive as Bonnaroo and Lollapalooza but last year’s Music Midtown in Atlanta, GA had an atmosphere that could match all of the top festivals. It takes place at the end of September in a lovely park in Atlanta called Piedmont Park. There are only two stages and the way the set times work make it so you are able to see every single band who are play the festival if you wanted. Quite clever in my opinion.

This year the lineup boasts a variety of huge artists such as Foo Fighters, Pearl Jam, and The Avett Brothers. However, it also features two smaller bands who have quite a following here in Columbia, O’Brother and Civil Twilight. Then there are female-fronted acts,Â Florence + The Machine and LP who have quite differing levels of fame, but both can belt out a high note like nobody else. It’s the perfect time for a festival like this, and features cheap ticket prices for the amount of bands you get to see.

You can buy tickets and see the lineup through the website:Â http://musicmidtown.com/