This week has been full of craziness. Â We had a seasonally appropriate dressed monkey shopping at Ikea, Paul McCartney is a stand in for Kurt Cobain and everyone went crazy over 12/12/12. 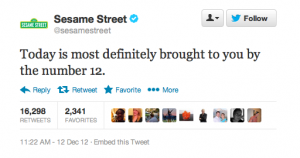 Additionally, everyone is most likely inundating you with end of the year lists. Â Don’t worry, we here at SceneSC will also be doing that for you. Â Let’s face it, our opinion is the only one that matters to you, so any best of lists created herein will be the be-all, end-all. Â If you want to know my personal Best of 2012 list, you can send me a self-addressed stamped envelope and I will mail you a transcript. Â  If you want to know what I am doing tonight, I’ll tell you that now. 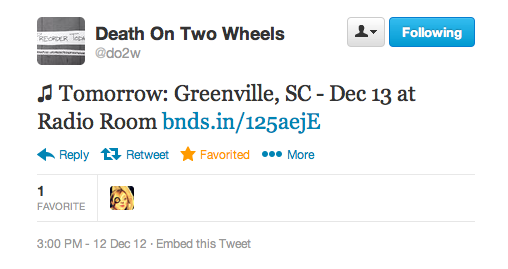 I’m a big, big fan of @do2w. Â Once upon a time, they opened for a little band named Manchester Orchestra and Trae yelled to me from a merch tent to buy their cd. Â When a man with a beard holla, hollas at me, I don’t not respond. Â I bought the CD and have been a frequenter of shows ever since. Â Consider me your proxy beardo hollering out right now and telling you to check out Death on Two Wheels. Â For starters they are fiscally conservative: 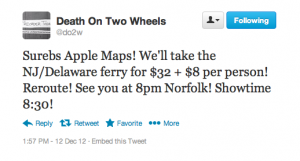 Also, I am not sure if that’s Sure, BS Apple Maps or if autocorrect had a stroke on that tweet, but either way something is off. Â I think Apple has some sort of maps/spelling conspiracy to bring down the Death. Â Don’t worry, I’m on your team. Â We’ll beat this technological foe together @do2w!

The guys in @do2wÂ may sound like they’d be inclined to bring the pain, but they brought the cute to twitter this week: 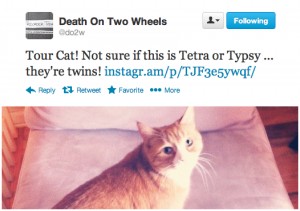 Tour cats?!? Â I feel like if this was also on Tumblr that it probably got a bajillion reblogs and notes and that every teenage girl in America now has a Tumblr crush on @do2w. Â If those things didn’t happen, then maybe the end of the world is near. Â I can’t imagine a interweb where that did not occur. Â However, personally, I tweeted about a mini-horse this week and lost 3 followers, so maybe Ikea monkey is the only cool animal this week. Â Regardless, catch @do2w on tour. Â  You won’t be sad and you might get to hug a kitty.

What you may not know about me is that I am a huge wrestling fan. Â I could tell you some wrestling stories that would make you giggle for days. Â Or maybe only for five minutes. Â I am not good at telling time. Â What will keep you in giggs is following @the_ironsheik on Twitter: 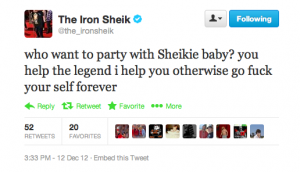 I feel like the ‘forever’ at the end of that tweet was a game changer. Â There’s insults and thenÂ there are insults with infinite time frames…well played Sheik. 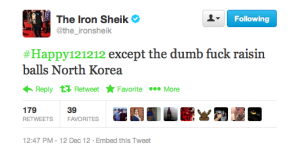 North Korea should be exempt from celebrating non-holidays. Â Also, raisin balls is another game changer. Â I can’t wait for someone to make me mad so I can use this.

I don’t know why I was surprised at the genius of this tweet, especially after the raisin balls comment, but I was. Â This is so poetic and true. Â Jason Kidd is not a kid, he is totally the man. Â The Sheik nailed it again. Â Please follow him on Twitter for a stream of tweets that will keep you laughing and humbled.

New people join twitter every day. Â Some have Twitter but just randomly start using it–side eyeing you @Pontifex. Â In order to keep up with all the changes, we need you to let us know which accounts tickle your pickle. Â Send your suggestions to @SceneSC with the hashtag #twitterthursday. Â Or you can always send me another SASE. Â I am sure either is just as efficient as the other.