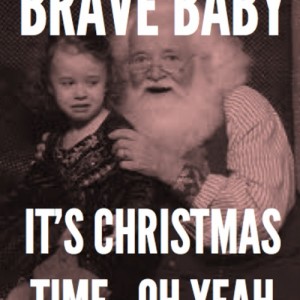 Tis’ the season for Christmas songs, and over the years there have been a few dandy original Christmas songs written by local musicians. The first that comes to mind is Todd Mathis’ song “Credit Card” with the chorus “Credit Card, Credit Card, Momma Put Christmas on the Credit Card.” Obviously an instant classic. In fact, I’ve only heard it once and I’ve had it my head since 2010.

Brave Baby got together recently and churned one out themselves. It’s helpful when the drummer of your band is also a stud at recording bands. In fact, Ryan Zimmerman recorded Forty Bells, the bands first full length release due out 1-15-13. For the first time on an official release, you’ll get to hear Zimmerman’s vocals, something you’ll hear more of on the upcoming release. Don’t be scared away by the cover art, this Christmas tune is fun and charming.