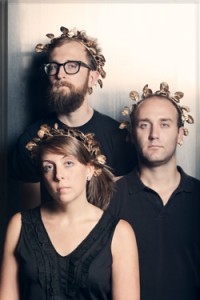 2012 saw the dawn of a new age.Â  I am not sure whether that applies to the whole world, or cosmos, or not, but it certainly applies to The Lovely Few.Â  This year saw a great deal of change in our personal lives as well as how we write, record, and perform.

This year we joined Charleston-based label Hearts and Plugs.Â  This has been a long-time coming, I think.Â  Dan McCurry has been involved with The Lovely Few since our early days.Â  I’ve long been a fan of his work with Run Dan Run, as well as Mr. Jenkins and Ash Hopkins.Â  We were very honored when they asked us to come on board.Â  What’s more, the label has grown this year, adding powerhouse-acts like Elim Bolt and Brave Baby.

We re-released The Perseids under Hearts and Plugs AND recorded and released a new EP The Orionids. This EP was one of the highlights of our year.Â  We recorded it over a two day period at what is now Apartment A, Dan and Megan’s studio in Charleston.Â  We mixed and mastered it atÂ  Archer Avenue Studio (Kenny has also had a great year, renovating and expanding his space) and released it in April for free.Â  We felt like it represented a good progression for us; a bit darker and grittier.Â  Hearts and Plugs helped us to get reviews on blogs around the world for these two releases.

One of our favorite parts of the year wasÂ  our Wednesday night rehearsals.Â  We developed a little schedule.Â  Alan would come over to the house, we would set up multiple sets of computer speakers and amps for a makeshift sound system, and then we’d run our set.Â  Afterwards, we’d go to the Whig for Trivi-yeah, their weekly trivia match.Â  We never did well, but we got to hang out, talk business, and occasionally enjoy their chipotle pimento cheese fries, which are completely awesome, by the way.

The year is culminating, though, in great personal change.Â  Earlier this month, Kate and I had a daughter, Sadie, and Alan is getting married to a wonderful woman, Leize Marie, on the last night of the year.Â  These changes in our lives are difficult at times, but beautiful nonetheless.Â  The changes and tribulations are inspiring.Â  They make us want to be better artists.Â  They make us want to be better people.

We are looking forward to 2013.Â  We will be more intentional with our booking with bigger live performances.Â  We are in the early stages of writing the next LP in our Meteor Series “The Geminids,” a record that will focus on dualities and tension in personalities and relationships historical, literary, and biographical.Â  It’s a big undertaking, but a welcome one.