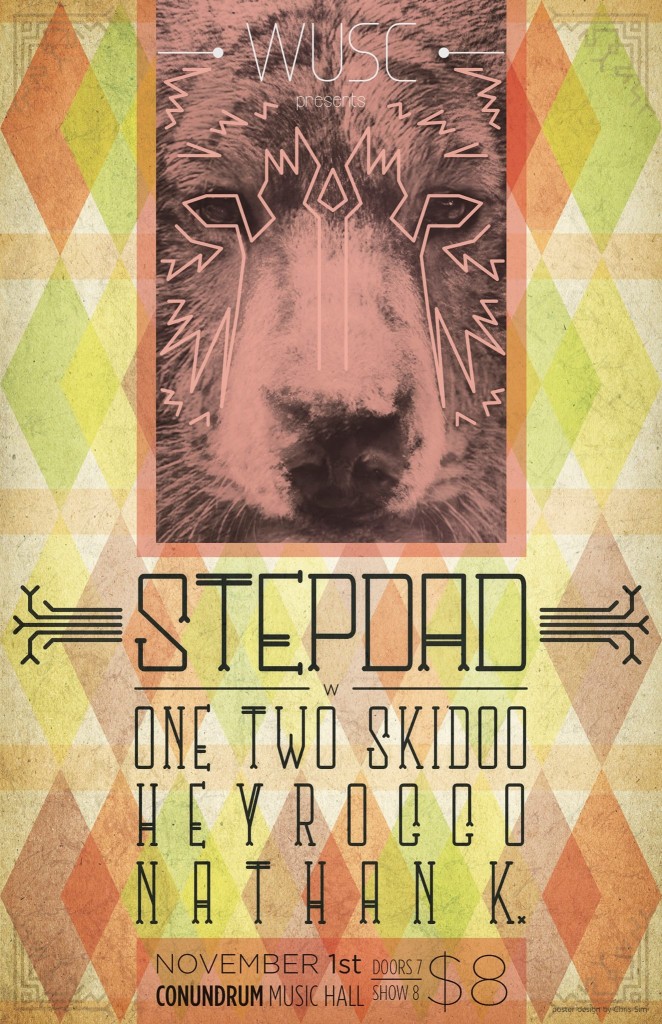 Excuse me, Columbia. Since when did you start getting really awesome shows so close to one another? After a wild Crystal Fighters show, a beautiful Dodos show, and an extremely successful Toro y moi show, another extravaganza is making its way to our lovely city. The show, which will be at Conundrum on November 1st, is somewhat of a halloween show, and all the bands have promised that they are going to be making out with at least one member of the audience (as long as they are dressed up in a costume that is more than a 6).

If you’re not familiar with these bands, let me give you a rundown. The headliners, Stepdad (http://stepdad.us) are an electro-pop group from Michigan who last played in Columbia about two years ago. After the show, they raved about the crowd in Columbia, and even suggested that it was the best show they had ever played. The singer ripped his shirt off for the first time ever in a concert and this time we’re hoping for more (socks). One Two Skidoo (http://www.frankiemunizracing.com/) are a heart-breaking golf team that play backwoods sunshine music that sounds as if a songbird got stuck in Aaron Carter’s basketball. They haven’t played a real-life show in two years and plan to continue that tradition. Heyrocco are a gorgeous 3-piece from Charleston who will be heading to Columbia hot off an incredible recording session up in Nashville, TN. Expect a bunch of fine-tuned new songs about mums, dads, and Nascar. Finally, opening the show is the angelic Nathan K. who will be serenading the crowd with his soft-spoken lyrics and loops-upon-loops. Make sure you get the early to witness this beautiful make.

Tickets are on sale now and can be bought here:Â http://www.brownpapertickets.com/event/488959