An Interview With Dom from Mount Kimbie

Mountain Oasis was this past weekend, and my full recap will be coming early next week. Â In the meantime, I have a chance to sit down with Dominic Maker of Mount Kimbie to discuss touring, their new album and James Blake’s hair. 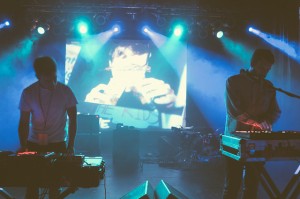 David Ballou (DB): Â We’re here with Dom from Mount Kimbie, welcome to Asheville how do you guys like it?

Dominic Maker (DM):Â  Great, we came through here about 3 years ago and it was sick, so we’ve been looking forward to coming back to Asheville for a while.

DB: Very cool. Â I wanted to ask you about touring first, how do you compare touring in the US versus in the UK or the rest Europe?

DM: We love touring, full stop.Â Â  But, especially in the US, everything is a bit foreign compared to what we’re used to back at home, so we’ve done a lot of things on this trip that we wouldn’t have done before like go to ice hockey games, casinos, its just been a lot of good fun.Â  The people are always friendly and nice, and make you feel welcome.Â  The one thing I would say is that the venues tend to be pretty poorly maintained in the US.Â  The sound systemsâ€¦I guess it depends on the venues you’re playing, and where you are sat in the kind pecking order.Â Â  But for this tour we mainly toured Rock venues, so a lot of those were very dilapidatedÂ and the sound was pretty awful.Â  It’s great to tour, but I think if we did it next time, we would be way more selective about the venues we chose to do because our set relies on having really strong sound and the clarity in the sound.Â  So we’ve learned a lot on this tour, but on overall I much prefer touring the US to anywhere else.

DB: This weekend I’ve been going to all of these shows, and a few of the artists I’ve seen before on tour as well as the festival set.Â  Do you guys approach a festival set any differently than you would a normal show?

DM:Â  I think we shed some of the stuff that we won’t necessarily make the point of what we’re trying to do.Â  So for the headline shows that we’ve been doing, we’re pretty much playing everything we’ve ever played.Â  But for something like this, we’ll tailor it slightly differently.Â  But there’s really only one, our show displays everything we can do, so there’s not a complete change from those sets to these.Â  We’ve just done a whole summer of festivals in Europe and the UK and it was great, and obviously its totally a different atmosphere to your own headline show but its kind of cool just turning up and setting up and being pushed straight on stage, especially us when we’ve got so much shit on stage.

DB: About your equipment, on your previous tour it was just the two of you, and now you are touring with a band?

DM:Â  yeah its me and Kai and our drummer Tony who is an old school friend of mine.Â  We got him on board a while back now because his year annersry just went past.Â  And that’s really kind of changed the game for us, its changed a lot of what we can achieve on the stage without having to sequence too much and its certainly added layers into the sound we had before.Â  And also with the new record, a lot of stuff (like) bass guitar lines that aren’t on the record that we wish we had put on there we can do now.Â  Its definitely a benefit having that extra pair of hands and someone else who can really put into what we’re doing and using his creativity as well.

DB: On the new album (Cold Spring Fault Less Youth), I absolutely loved it.Â  A beautiful piece of work.Â  Compared to your first album which seemed like a soundlab of sorts, this one has much more traditional song structures, even adding guest spots.Â  Was this intentional or came about more naturally?

DM:Â  I think from day one everything has just sort of come about, we don’t really talk about it or work out strategically what we’re going to do musically.Â  So When we went in to write, I think the actual method of us writing hadn’t changed but it was more of a mental thing where we had been away playing shows for a good 2, 2 Â½ years from that first record (Crooks & Lovers) so when we came back to write again we had almost forgotten how to do that andÂ  We had to really start again.Â  And I’m quite pleased that happened because it really refreshed what we wanted to do and at the time the sound we were really interested in I think we were listening to music that was way more as you said your kind of standard song structure kind of songs, and that must have bled into what we wanted to achieve.Â  I think with the first few records, with the EPs as well, we were kind of all over the place, we didn’t really know what we wanted to do even while we were writing.Â  Wheres with this one we, we didn’t know what the hell we wanted to do but we sat down and found this sound we were interested in, then it really fell all into one place.Â  I think introducing other instruments like the drum kit and using the guitar a bit more and experimenting with the guitar and the voice as well, obviously the vocals really changed it a lot.Â  That really contributed to the sound that we achieved on the latest record.

DB: What have you been listening to recently?

DM:Â  Ummâ€¦I’ve kind of been stepping back a little bit I’ve been listening to a lot of stuff from the 70s, a lot of stuff involving drum machines because myself and Kai we’re both really interested in the sound of old vintage drum machines and in fact we actually used quite a bit of that because we went in to record some drum tracks with Aaron Ramsey (drummer from Stereolab) and he had a ton of vintage gear that he’d accrued over this long touring life that hes had.Â  And yea he let us run riot with those and we played with some amazing old equipment that he had.Â  I’ve been listening to a guy named Timmy Thomas who is sick, he did an album called Why Cant We Live Together.Â  A label called TK Records, from Miami who put out a load of that kind of stuff from the same kind of era and ilk.Â  Ummmmmmm I’ve been listening to a lot of Jonwayne because we recently had him on tour.Â  Its kind of unavoidable when hes sitting right next to you, but yea that guys insane he was making beats on the bus.Â  Hes out of control.Â  His new album is actually out very soon and its amazing.Â  So yea I guess I’ve been listening to a lot of hip hop stuff through him, he gave me a massive playlist of stuff that I’ve been going through.

DB: Do you have a preference for UK hip hop vs American hip hop?

DM:Â  I know so little about the UK side of things, in fact I know so little about the US side of things as well.Â  I think to be honest John kind of sparked an interest that I had way way back when I first started to listen to music.Â  And hip hop then, I didn’t really do much exploration into what I was listening to, but I listened to a lot of it.Â  And Jon really stoked the flames again.

DM: (laughs) I don’t know anymore I haven’t seen that guy for a long time.Â  I’ll tell you what, I couldn’t really say how it smelt but he did cut his own hair, which I’ve never seen any of my friends do.Â  He used to just grab a shaver and just do it himself.Â  I guess now, he definitely kind of smells of money at the moment, hes really killing it.Â  Hes got a nice fragrance to him, and hes very clean.

DB: If you could interview any other artist here at Mountain Oasis who would it be?

DM:Â  I’ve seen limited number of artists on the lineup, but I’d quite like to interview Disclosure.Â  We actually played with those guys for the first time in September and it was the first time we ever really spoke to them.Â  I had just heard the stuff on the radio and I thought it was alright but it wasn’t really my cup of tea.Â  Then we saw them live, they headlined after us at this small festival in Montenegro this really bizarre setting but the actual show was amazing I really really enjoyed it.Â  And the way that the guys spoke about the songs really drew me into what they were doing.Â  And I think there’s a lot more to them than just pumping out chart hits all the time.Â  So yea I guess id like to delve a little bit more into the minds of those guys.