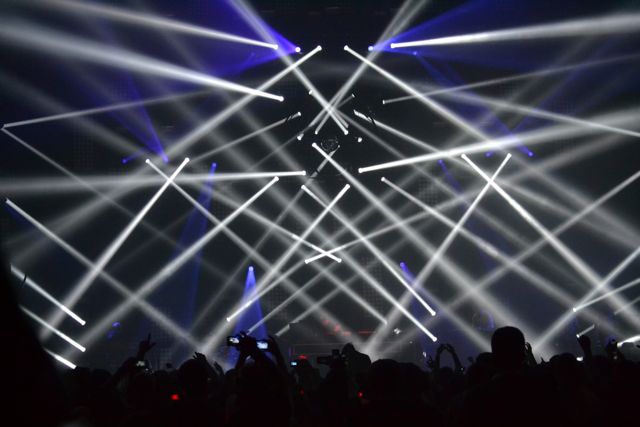 Having some time to reflect on the first annual Mountain Oasis Electronic Music Summit I’d say it was a success. As with Moogfest in years prior there were several lineup changes leading up to the festival. Many of the artists who dropped (Delorean, Superhumanoids, Big Black Delta) were the ones I wanted to see most, which did put a bit of a dampener on things. However, almost all of the performances I saw were exceptional and the festival experience itself was as enjoyable as ever.

It never failed that Moogfest arrived just in time for the first bitter cold weather of the year. Mountain Oasis was no different. The low on Friday was 25 degrees and the wind from the open doors of the ExploreAsheville.com Arena cut through us whenever we passed by. Having attended the festival for many years now I’ve befriended several people including photographers, a security guard and the people who dress as garden gnomes. The first ever MOEMS will be forever etched in my mind as reconnecting with them was very special for me.

There were a decent number of costumed attendees this year. The gnomes, as previously mentioned, Sexy Sax Man, Bender fromÂ Futurama, people on stilts dressed as giant mushrooms, Magnum, P.I., and Freddy Mercury were among the list. There were also some new additions. At the back of Exploreasheville.com Arena were four connected canvases where local artists were contributing all three nights. We watched as the drawings evolved into paintings and though they were four distinct ideas they connected well as a kind of mural. Directly behind the mural was a tunnel lit with rows of yellow, red, green and blue lights. When I walked through it with their defragmentation glasses it appeared as though I was completely immersed in crystalized lights. I managed to get a decent picture of the experience by placing the glasses over my camera lens. When I came across other people in the tunnel I could make out their shapes and movements but they also appeared as crystalized beings. Watching people dance in the tunnel was surreal. The first show I caught this year wasÂ Purity Ring. The stage was adorned in what could be described as fishing rods with cocoons hanging from them. The smaller cocoons setup around Corin’s instrument stand were percussion triggers that lit up when played. With Megan’s encouragement the crowd began to dance and with that the festival had begun and the excitement and anticipation of scurrying about the streets of Asheville from show to show set in. It was a wonderful performance. Next up wasÂ Deltron 3030, and being a long time fan of Del, Dan the Automator and Kid Koala, I had been really looking forward to this show. Accompanying the dynamic trio were a four-piece horn section, a four-piece strings section and four backup singers. Automator was dressed in tails and proceeded to take on the role ofÂ maestroÂ for the performance. Del and his guitar-player proudly displayed their blackÂ MoogÂ t-shirts as Kid Koala went to work stage: left. The show was great as all the songs were from their 2013 album,Â Event 2, with the exception of “one last song” – a cover ofÂ Gorillaz,Â Clint Eastwood.Â Shortly before that, Automator introduced Kid Koala as “Canada’s number one export overÂ Molson’s,” followed by a killer bit of old-school DJ free-styling; the kind that takes precision, skill and years of practice. On the way off the stage, Del the Funky Homosapien left us with a reminder that, “You don’t need Facebook.” 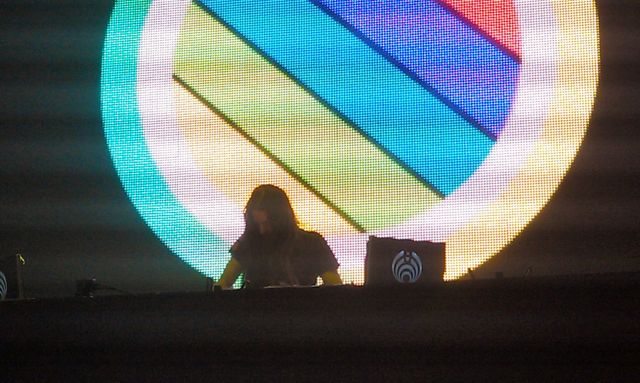 I had time to kill before the last show of the night butÂ Neutral Milk Hotel had a policy againstÂ all photography – including mobile phones (a little out of touch with the last decade). Not particularly caring for their music or arcane policies, I decided to venture about the adjoining venues to photograph costumes. I made it back to the arena in time for the beginning of Bassnectar.

We were crammed in the photography pit trying to get some shots all the while being careful to avoid standing in front of the heart-stopping subwoofers. The enormity of the stage setup and light show made it almost futile to try to try for photographs other than close-ups of Bassnectar himself. I would later reconvene with photographers at the back of the arena and even the top of the arena where we were getting extraordinary views of the show. However, I did not make it out of the pit before a zombie-eyed crowd surfer careened into the back of me and crashed to the floor. I resisted the urge to kick him in the ribs as I saw securityÂ en route to apprehend him. Having been unexpectedly battered by crowd-surfers on several occasions, I hold no soft spot in my heart for them.

The combination of the visual, auditory and physical stimuli was unparalleled. You could escape your senses if you stood still and let the experience take over – similar to staring at aÂ magic eye image – and all the while there was a giant party raging around you. I saw a few people beginning to struggle as the combination of drugs and sensory overload began to take hold, but everyone else, including myself, was having the time of their lives.Â Full disclosure: I do not consider myself to be a Bassnectar fan. I don’t particularly care for that style of dubstep music, but I had a fucking blast. A Bassnectar show isÂ like riding a good rollercoaster. As soon as it’s over you just get back in line. I’ll definitely check him out again the next time he’s around. 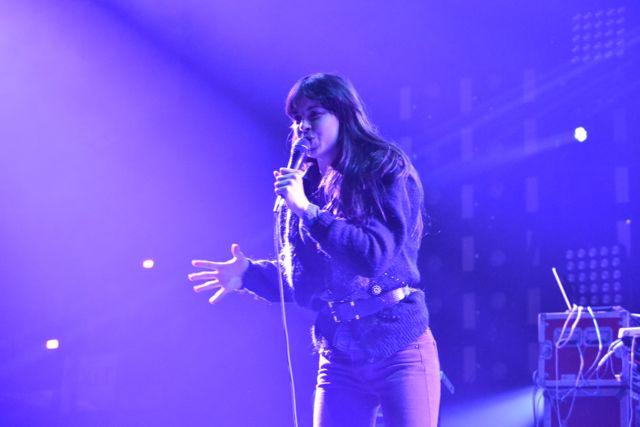 Saturday night kicked off with a killer set fromÂ Bosnian Rainbows. It was very intimate for an Arena show with Omar RodrÃ­guez-LÃ³pezÂ and Nicci Kasper adjoining their equipment to either side of the drums. They were probably only taking up a 10â€²x12â€² area of the entire stage. As the into toÂ EliÂ began, Teri navigated her way to the front of the stage. Her vision was impaired as she was wearing a large wool coat with an oversized hood that hung well past her face. After a couple of songs she removed the hood and began dancing erraticallyÂ  about the stage. They played most of the songs from their debut album and it was a great start to the second night of MOF. 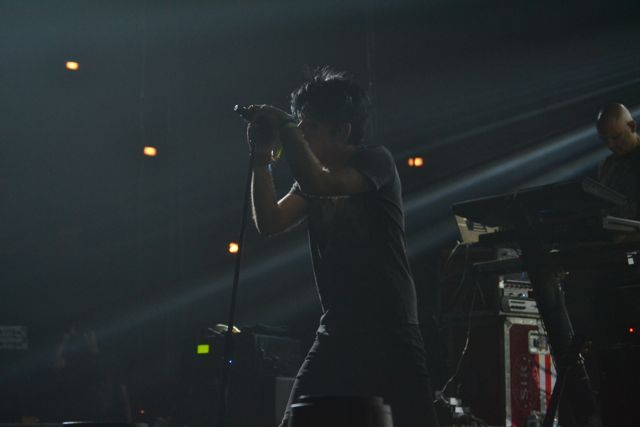 Next, I ventured over to Thomas Wolfe Auditorium to catch a few minutes of ZolaÂ Jesus with JG Thirlwell. Zola’s voice paired well with the orchestral dance arrangements and it made for a very interesting show, but about halfway through the set I headed back to catchÂ Gary Numan. Gary Numan is of the earliest and most innovative creators of electronic music as well as one of the most prolific. He has released 21 albums since 1978, 18 of them coming after his first number one album, The Pleasure Principle. Numan played mostly songs from his new release, Splinter (Songs from a Broken Mind), which is a fairly heavy album. In fact, the performance of his 1979 hit,Â Cars sounded more like Fear Factory’sÂ cover of it fromÂ Obsolete (1998) than the original hit. (I saw Fear Factory perform it in 1999 and I’d say the only significant differences were the vocals and FF’s clicky bass drums.) 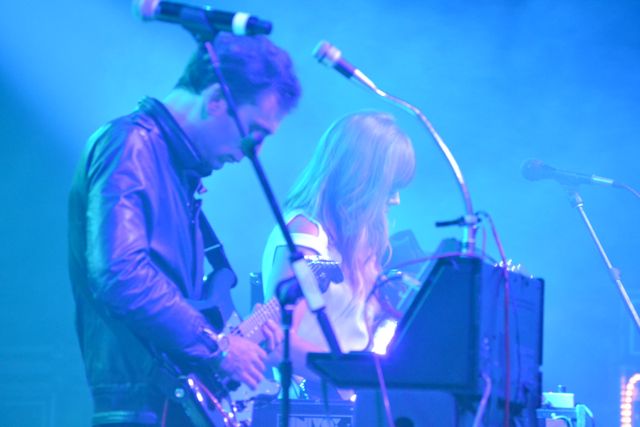 I made it back to Thomas Wolfe to catch some of theÂ ChromaticsÂ show. It was a nice contrast to the Numan show in both performance and venue. Thomas Wolfe is a warm and comfortable venue where you can relax and absorb. From the balcony I could look down on a sea of darkness interspersed by swaying, illuminescent jellyfish, dancing garden gnomes and hundreds of red-lit devil horns that were being given out by Four LokosÂ promoters. Seeing Chromatics in between Gary Numan and NIN made for a very dynamic evening. It was the calm before the storm and I enjoyed it thoroughly. 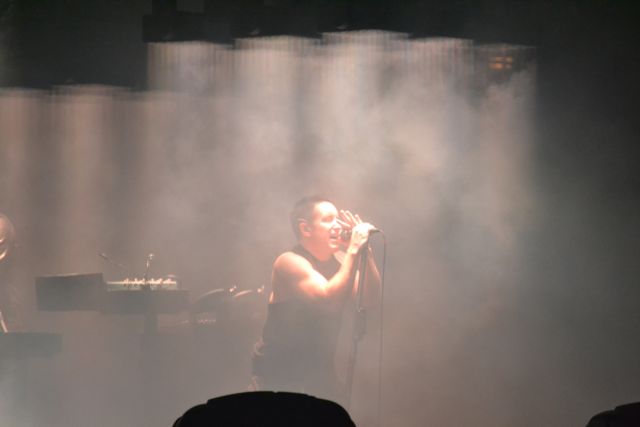 Having seen NIN several times I knew it was going to be a great show. I was very interested in what type of stage and light setup they were using as each time was completely different and severely intricate. This tour they began bathed in white lights from what could be described as an industrial version of a drop-tile ceiling that moved higher and higher throughout the show. The theme changed with the moods of the setlist which relied heavily on songs fromÂ The Fragile, interspersed with songs from their new albumÂ Hesitation Marks. Reznor also threw in staples likeÂ Piggy, Head Like a HoleÂ andÂ With Teeth.Â Around 1 am I found myself near the front, left corner of the stage kicking a soccer ball with The Sons of Anarchy only to notice Gary Numan perched on the walkway above me between the floor and balcony seating. He was completely engrossed in NIN and seemed not to notice the chaos ensuing below him. NIN plowed through the entire hour-and-half without stopping, ending withÂ Hurt, and with that the second night of the festival came to an end. 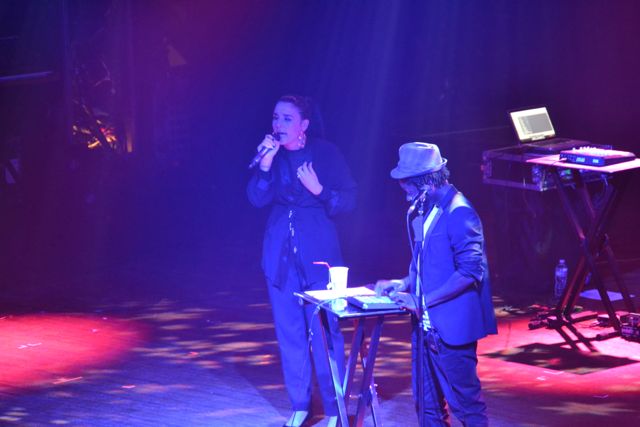 The last night of the festival began with Adventure ClubÂ but I ducked out early to get a good spot forÂ Jessie Ware. Â People began piling into the auditorium well before she went on and when she finally walked out the place erupted. Earlier that day, Jessie had been exploring the streets of Asheville and meeting fans. A cluster of them were crammed as close as they could get to the left side of the stage and they were elated when Jessie recognized them. She filled the entire hour with most of the songs from her hit album,Â Devotion, pausing briefly between songs to encourage people to dance and look sexy in case their future partners were in the vicinity. (Jessie pointed out that her hairdresser met her husband at a music festival.) The show was spot on and Jessie worked the crowd like an old pro. 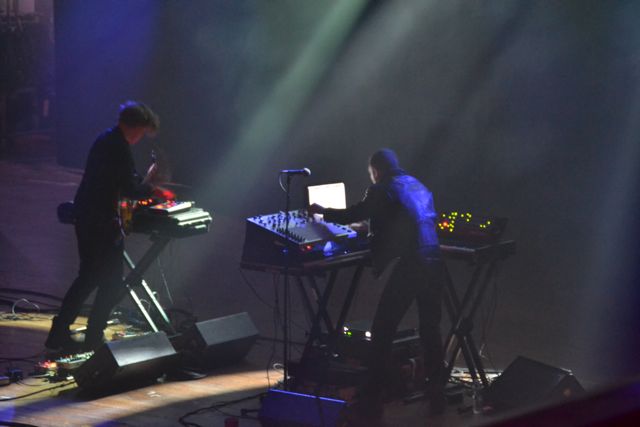 By the time I made it back to the arena, PANTyRAiD was in full force. There were fake PANTyRAiD one-hundred-thousand dollar bills everywhere as they had been blasted from the stage. I ran into the gnomes again as well as a guy dressed like Louise from Bob’s Burgers. I had been trying to get a photograph of him all weekend. The crowd raged like a sea of anarchy asÂ Dance On (cocaine, LSD, ecstacy) blasted the arena, but I left shortly after that to catch some ofÂ Darkside. 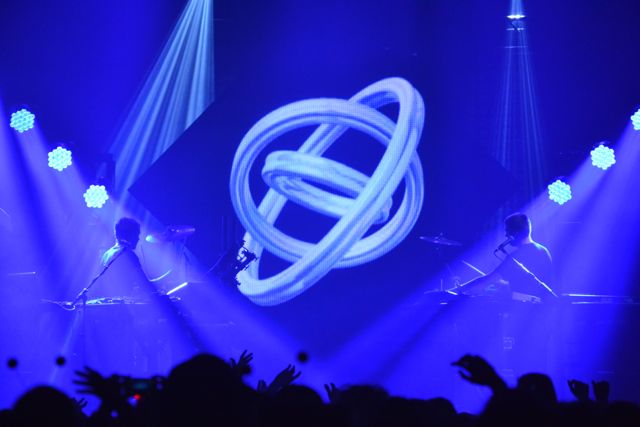 This yearÂ DisclosureÂ moved up from the Asheville Music Hall to ExploreAsheville.com Arena. With the larger stage they brought more equipment and a kick ass light and projection show. Brothers Guy and Howard Lawrence set up across from each other with multiple instrument rigs proving that EDM music doesn’t have to be just about counting to four.Â SettleÂ is an infectious album filled with one deep soul house hit another and if you’re not ready to dance at a Disclosure show you should probably head to another venue. The highlight of the evening was when Jessie Ware showed up to sing her vocals onÂ Confess to Me. Disclosure have found a formula for delivering quality dance songs without going too far over the top. 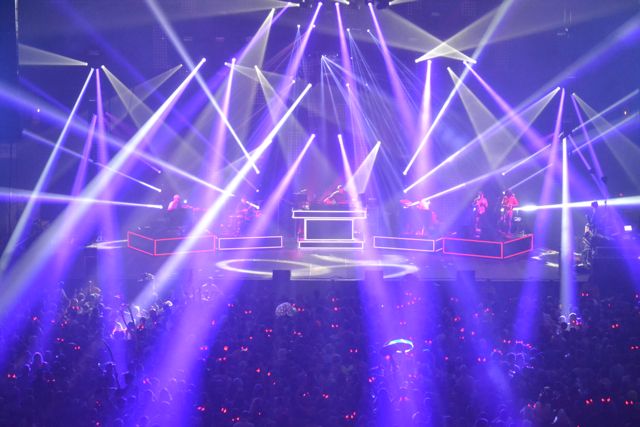 The last show of the festival is alway filled with mixed emotions but as soon as the music starts everything is all right.Â Pretty LightsÂ had also performed at the previous years festival. This time they had added a few more members including a horn section and performed mostly songs from their new albumÂ A Color Map of the Sun. Each of the five stage sets were lined with neon lights and the multicolored spotlights and beams combined for a wickedly mesmerizing display. It was a wonderful ending to another quality production by AC Entertainment and the city of Asheville. I’m looking forward to many more.