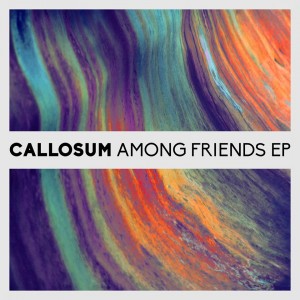 If I were to sit here and type a review that started with Callosum’s new EP is cool, I would be condemned immediately by the gods of music journalism and thrown into the void amongst the creators of vapid YouTube comments and those who’ve only expressed their tastes through clicking a ‘like’ button. When you say something is ‘cool,’ it’s close to saying nothing. In some cases, saying “oh, that’s cool” is a form of dismissal, used to get someone to leave you alone with their constant links to something they found on buzzfeed, (Top 21 Reasons Why You Never Get Shit Done When You’re Online). ‘Cool’ has lost a great deal of bite.

But Callosum’s release coming out this Friday, Among Friends EP, is fucking cool. It is a sexy orchestra that, when popping off in your earbuds, makes it almost impossible to not walk like a complete boss two days before retirement. I’ve tried, and it cannot be done, I’m even winking at people. It’s scary. You know when you’re giving people you don’t know very well a ride in your car and you have that critical moment where you want to put on music that will prove to them you cruise right? This EP is the Fonz’ leather jacket of the Columbia electronica and instrumental hip-hop scene. Put this stuff on, I swear, get that bass to 5, and roll the windows allll the way down, (it’s not that cold yet), and your passengers won’t even mind that you just got lost because all the houses behind 5 points literally look exactly the same and it’s not even really your fault because you never drive around that part of town and you’re super tired and it’s dark and where the hell are any house numbers?

The stand-out track for me on this thing is “Change Your Mind (feat. Thi Q. Lam and Cool Lou). Starting out unassumingly, Thi’s voice shepherds you through the groove with lyrical ruminations of moving on from a love interest that was simply unreadable. When Cool Lou’s verse comes on, the beat picks up and accompanies the hypeness of his attack, taking the song to a higher level. The mix of Thi’s Bon Iver-esque vocals on the R&B vibe and Cool Lou’s verse delivers. After the rap verse, Thi continues his vocals on this new level. It’s almost as if his voice is beckoning you through an icy labyrinth of frosty synths, to finally lead to the acoustic guitar break that re-contextualizes the entire song in a way that makes no sense on paper but complete sense when you hear it.

Which you should. You should hear it all. This project is already a glittery-ass gem in the often unfruitful mine of the Columbia electronic music scene. Sure, it may not be fully cut, or mounted on a ring, but it’s all there. And now you got a chance to listen. The EP drops this Friday, and he’s performing it at Conundrum Music Hall.

Need more convincing? Let’s break it down. You’re still with me? Great.

Anyone can listen to it and get a feel for its crunchy butter. Tracks like “Tents” and “Peace Blood (feat. Mick Johnson)” showcase Mason’s vocals, masterfully mixed with harmony into the kaleidoscope of down-tempo synth-tones that drift out of your speakers like the ghosts of abyssopelagic fish. On the other hand, tracks like “Snax on Snax,” “Girls,” and “North Mesa” pack a punch of hype with their 808 sub-bass kick drums and double time, triple-time and other faster time division high-hats, just begging for a well-placed bitta trap rap.

The first time I heard “North Mesa,” I made a somewhat inappropriate noise in the library where I was studying, similar to the sound you make after the first gulp of ice-cold apple-juice after having to climb any stairs ever. It was refreshing. The Yeezy-esque soul sample is suddenly changed up to a frantic and heavy hip-hop vibe, clicky high-hats flickering all the while. And then, about two thirds of the way through, it has a complete breakdown, stripped to its core, dropping into a flow so slow and sexy even R&B artists would widen their eyes, frown, and nod knowingly.

“Snax on Snax” comes in with what sounds like the footsteps of Leatherface approaching the cabin of his victims. This ominous tone is traded out for what feels like a horror movie cough syrup-induced fever dream. But, the strange thing is, it never lags. It gets its head down and gets into it.

Stop muckin’ about and come to the EP release show. Friday night. Conundrum. Link. You’re gonna love it, it is so cool.