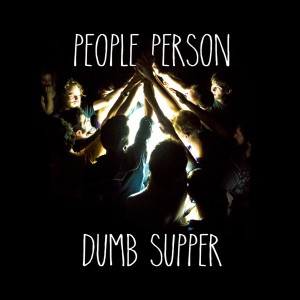 You can’t swing a cat on Pitchfork.com without hitting a grungy female fronted indie rock band these days. For a guy that grew up worshipping Hole, Julianna Hatfield, Sleater Kinney and the likes it’s a youthful renaissance and a reminder to why I fell in love with the genre, hormones aside of course, most of the songsÂ tend to be very candid lyrically. Bands like Swearin’, All Dogs, Waxahatchee, Big Eyes, Speedy Ortiz all have solid 2013 releases under their belt, and with their debut release on Post Echo, People Person step up to the plate.

In late 2011 the band fronted by Jessica Oliver, released a dingy, crudely recorded seven songs titledÂ Swimming for Keeps. The droning album was tracked with the internal mic on an Apple iBookG4 which made for a scuzzy recording to say the least. Â But hidden behind that low fidelity hum and minimal mixing were seven songs that had more of a life span than justÂ Swimming for Keeps. The believable Everly Brothers cover of “Problems” and “Frances Farmer has her Revenge on my Seoul” are the only two songs that didn’t make it onÂ Dumb Supper, although the latter was featured on Fork and Spoon’s Summer of Love Sampler. The other five tracks got a makeover courtesy of The Jam Room in Columbia and Apartment A studio in Charleston, then mastered by Kenny McWilliams at Archer Avenue Studio. From Swimming for Keeps foreword Oliver and crew seemed to find confidence with live shows that were at times noisy and quirky and other times assertive and confident. It’s like they realized that those songs were gems in need of a tumbling.

Dumb SupperÂ starts off fresh with a burp and the new track “Dag”, a buoyant song with drums that beckon handclaps and reverb drenched guitars with distortion that still offers clarity. Oliver drops references and visuals to North Charleston and James Island, an area that she now calls home, giving the song a setting and the feel of muggy summer air. “Fallout” is easily one of the most memorable tracks on the album, opening with two familiar chords that sound more Nirvana than “Proud Mary”, before dropping in with the line “The only thing better than falling in love is falling out of it”. It’s an anti love song that’s self-aware, with Oliver calling herself out over peach fuzzy guitar and a kinetic bass line that doesn’t seem to take a breath.

The third track “Astoria” is slow burning, and after the opening tracks you expect drums and bass to make a huge drop in, but they never do. The track is built on oohs and ahhs and a couple of chords, droning for almost as long as the first two tracks combined. The bass does make a subtle appearance late in the song along with quivering feedback that peaks out, making for a nice but all too short moment. “I’m Slimy” is the shortest song on the album followingÂ the longest – it’s a break from the grunge of the rest of the album with rolling drums under a clean power chord progression which is accented on top by a lap steel. Listening through the eight songs it might be hard not to skip over the track to get to “Portions for Fatties” which is a real gem and the anchor of Dumb Supper. It’s one of those songs you click the back button and listen to on repeat. A bouncing buoyant track with seemingly no regrets towards the bad ideas before.

Jessica Oliver has a flair for melody, with her guitar playing serving more as a vehicle for the message she’s out to deliver. She also plays drums in a handful of bands, so you wonder if she’s a drummer playing guitar or a guitarist playing drums, but that doesn’t really matter because she can just be a musician playing songs. The fact that she can do it all just makes her a gem and surely the source of some professional jealousy. “It Bugs Me, It’s Nothing” and “Frances” are both great examples of songs more about the message than any sort of technical accomplishments. The first being a song written lovingly about a friend, and the closing track “Frances” a stark and clear song with a tambourine splashing in the background. I’ve listened to the track at least 100 times this year and have never once skipped it. Some things can say a lot without saying a lot.

There’s a lot that’s good on the album, not much that’s bad, but it has room to be better, and nothing ugly. But that’s just like my opinion man. I could definitely go for 3 Â more tracks like “Dag” and “Portions for Fatties”, but everything in moderation right?