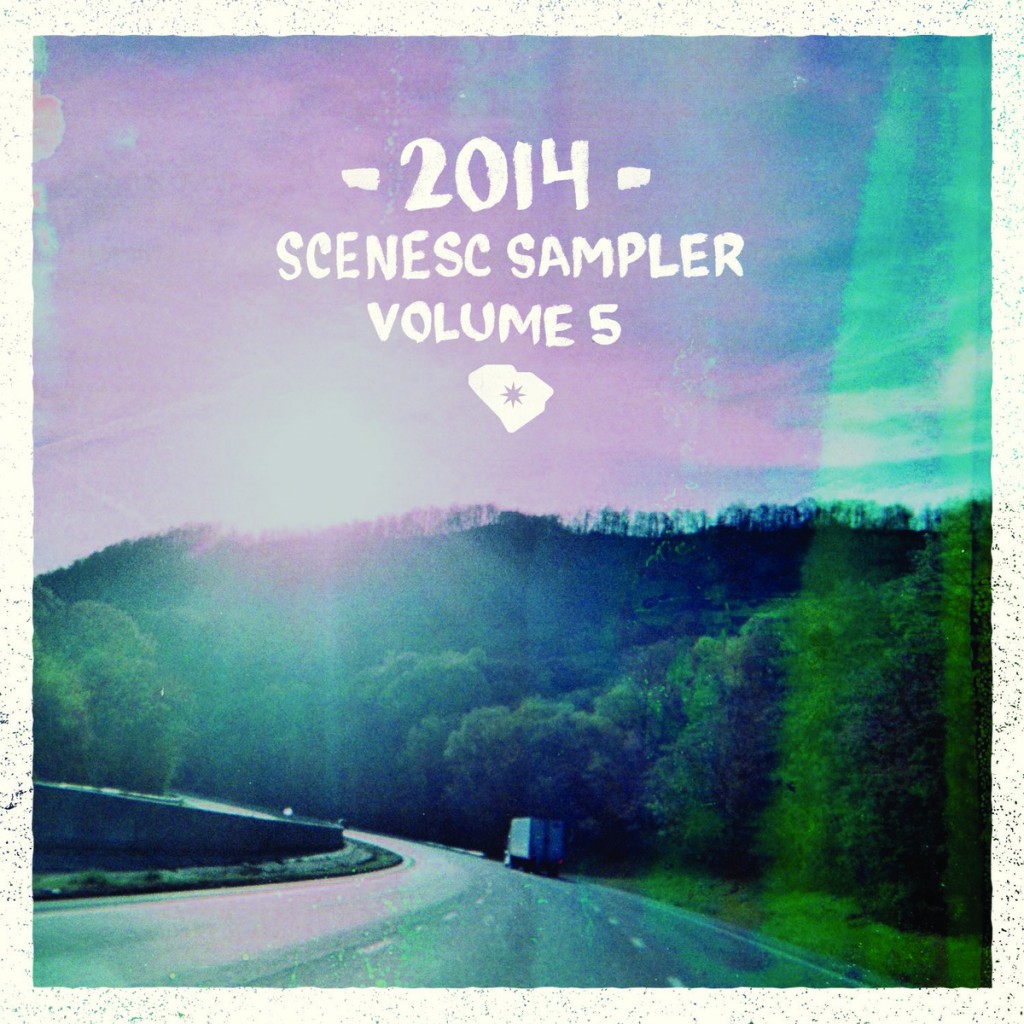 It might be most remarkable that we made it to our fifth compilation. Coming up on six years of existence in July, we didn’t have a grand five-year plan, but here we are releasing another sampler filled with great South Carolina tunes from 17 artists that have never been on a SceneSC sampler before and seven returning sampler alumni. Last years sampler featured 18 artists that had never been on a sampler before, and next year we hope to showcase even more fresh acts. It makes me proud to be from South Carolina putting these together and always knowing there are many more bands we wish we could include, and enough to feature mostly new artists each year. That’s the underlying theme this year, beingÂ proud of where you’re from and the art that surrounds you. Â We’re deep in the Southeast, pinned between the ocean and mountains, with a rich history filled with shame and rebellion. There’s a polarization of culture in our state that makes us who we are. Old time religion of the bible belt fighting younger generations with open minds that question the opinions and practices of our forefathers give birth to a new wave that understands both where they came from and why they dare to beÂ different. The old and new is most apparent in Charleston, a city now operating musically on young artists not from there, but forward thinking individuals from all over the state and country. A third of these bands call Charleston home, but only a handful are native to the Holy City. College towns in SC are artistic breeding grounds with high turnover, but magic moments.

This compilation is just a sample of some of the outstanding music being made within these borders. We could never touch it all, but you can. You’re only a search engine away.

Muscle Memory– David Adedokun keeps his music skills sharp in bars around Columbia night after night playing a mix of covers and originals. He also hosts one of Columbia’s premiere singer-songwriter nights keeping him on the cutting edge of talent in town. Muscle Memory is his new project and it’s much different from the his previous band, the alt country rooted Daylight Hours.

Jordan Igoe– Greater Charleston native Jordan Igoe spent her whole life writing her new album How to LoveÂ and was it ever worth it. Her voice rings sincere, southern and true singing personal songs focusing on how to love oneself.

Keath Mead– Keath Mead came out of nowhere late in 2013 when we saw a tweet from Columbia superstar Chaz Bundick of Toro y Moi that readÂ “I recorded this guy, check it out and spread the word. A M A Z I N G”. We followed the Soundcloud link and fell in love with the tunes and were lucky enough to include it here. Mead’s music career is still green, and promising and on the rise.

The Restoration– The Restoration centered an entire EP around this song. A song that broke them from their historical folk boundaries and opened up a can of Southern satire. It was a live staple for years and it found a welcome home on that EP and a fitting place on this compilation.Â

Brave Baby-Brave Baby and The Restoration are the only two bands that have been on every sampler, except Brave Baby were on the first couple in the form of Wylie. Not only did the band’s name change, but they revamped the whole project and things started to take off. “Find You Out” fits Brave Baby’s new style well and while it’s an exclusive to us it sounds like it could be a potential hit for them.

The Mobros– Two of the most talented young blues guys out there, The Mobros new and debut album sounds years beyond their young age both the ear and songwriting wise. “Trampstamp” is the lead single and one of the hardest grooving sexy tunes on the album.

Grace Joyner-Â We first found Grace Joyner singing backup in Elim Bolt and Brave Baby, but she proves here she was destined for the center mic. Her debut release is due in spring on Charleston label Hearts and Plugs with each song focused on her voice and her personal journey.

Small Sanctions- Led by Grayson Venters driving guitar and vocals, and flanked by two veterans in Nate Puza on drums and John Fowler on bass Small Sanctions play a style of young rock much different from Venters previous projects. From the indie emo driven The Devil and the Lion to his acoustic solo material, he’s come into his own and found his voice with Small Sanctions.

Tyler Bertges– This dude’s a mystery with a full length album on the way. This track showed up in my inbox early on in the compilation process via producer and recording engineer Wolfgang Zimmerman (Brave Baby, Octopus Jones, Jordan Igoe). Bertges is currentlyÂ a Charleston resident with a buttery voice that melts and bubbles through your speakers.

Magnetic Flowers (Coma Cinema and Karmessiah Remix)- I broke my own sampler rule by letting this song on the sampler, but for good reason. While this is the second Magnetic Flowers song from the same album, last years sampler featured their song “Trout Fishing”, this remix from Karmessiah and Coma Cinema shook the song up with a delicate and tasteful change-up.

Can’t Kids-Â “Alison Wonder” is the defining song from the new Can’t Kids record. Opening with the yelps of Adam Cullum and Jessica Oliver they take us down the “homophonic rabbit hole” giving us as the listener the choice to interpret as we see fit. It’s the underlying theme behind the album beckoning us to come along.

Mechanical River- There’s just something so magical about Joel Hamilton in his converted microphone baseball helmet, ironing board keyboard stand and economy line antique electronic keyboards. He can do it because he has the chops. “Boyfriend Yes” showed up as a welcome surprise in the compilation process.

Maybe Marigold-Â Years ago we came across a very talented artist and wonderful voice in Taylor Huckaby. Now she’s Taylor Neal and she’s teamed up with Tarlatans guitarist and vocalist Taylor McCleskey for this new project. I’m not sure the two could sound any better together with a magic that doesn’t happen much in real life, but happens weekly on the hit ABC television series Nashville.

Release the Dog-Â Led by Ross Swinson, we were first came across Release the Dog while searching the caverns of Bandcamp. It took a while, but the band followed up their two song demo release with a full length album late last year. That albums filled with fine guitar work and smart songwriting from each member of the trio.

Alexa Woodward– I like to tell the story about how I was hanging out at a party in Greenville and the next thing I know Alexa Woodward is playing a song 3 feet from me. I’ve never heard so many grown people hyped up on craft beer become silent so quickly. “Nightjar” features The Restoration’s Daniel Machado on backing vocals and is the second track off her amazing new upcoming album Might Nigh.

Johnny Delaware- Johnny Delaware is another Charleston transplant, but he comes from the distant land of South Dakota. He’s found comfortable company in Charleston, playing guitar with Susto in addition to releasing his album Secret Wave last year. KrauseÂ is one of the songs off that album that deserved some more attention.

Rejectioneers– Rejectioneers have a new EP coming out in two weeks led by this track. It’s the emotive rockers first release since the highly anticipated 2011 release 25, and possibly their strongest material to date. It’s hard to say their sound matured, the band is built with Dad’s of the music scene, but they’ve definitely found something that wasn’t there before. I think they found each other as band mates. PS, Dad’s of the music scene is a total complement.

Yosef-Â Hunter Duncan was referred to as young blood in this music scene for a long time, but now he’s proven he’s destined for bigger things. He’s not shy about picking up a guitar and playing a heartbreaking ballad in front of any crowd, and he could silence even the most staunch doubters. Just listen to “Swoon” and it’s easy to hear.

Trees on Mars– Trees on Mars are that rare progressive instrumental band that don’t overstay their welcome with each song. This song was recorded live at the Jam Room, that goes to show you they aren’t studio generated smoke and mirrors. They’ll say they have plenty of room for improvement from their first EP. If that’s true their future is bright.

Martin and the Positronics-Â If I could give a most improved award to a South Carolina musician it would go to Thomas Ray. Some wave of confidence in the music he was writing swept over him at some point, moving from some you might notice at an open mic night, to someone who commands your attention. This song is a prime example of the future of his direction.

Falling off a Building-Adam Cullum might be at his best by himself behind a piano singing beautiful songs that only his fascinating mind could create. This song defines him in some ways, his fragile yet steady voice over piano with accordion hiding in the background.

Susto- Since ending Sequoyah Prep School Justin Osborne didn’t slow down his songwriting, rather he doubled up. Relocating to Charleston seemed to inspire him to spew out songs like a shaken Coca Cola. This kind of songwriting spree could result in a bunch of wasted tunes, but he seems to hit some magic in every song. Susto’s debut full length comes out April 1 and this is one of the star tracks.

Cancellieri- On the final track of the sampler we somehow come back to the first track and David Adedokun. It was at his songwriter night when I was first captivated by Cancellieri. After hearing this song once I knew it was the closing track in all of it’s naturally delicate glory. Walking guitar lines with banjo rasping in the background blanketed by Ryan Hutchens genuine vocals.

Dear Blanca-Â If you download the full sampler you’ll find an Easter Egg song, and that song is a new track from one of South Carolina’s most promising bands Dear Blanca. Dickerson is in songwriting stride with his new band ditching most of the back catalog live for all new tunes. It’s a natural progression, but for Dickerson the songs are head over heels better. Dear Blanca’s dÃ©but albumÂ Talker received some high praise, but the new material blows it away. I enter this track as proof.