Ben Kronberg is a comic from New York City, currently touring the Southeast.  This Friday he will be at the Red Door Tavern in West Columbia and this Saturday at CityRange in Greenville

Ben has been on John Oliver’s New York Stand Up Show, had his own Half Hour on Comedy Central, and has appeared on Jimmy Kimmel Live. You can also look out for him in late March on @Midnight, but before that you have the chance to see him in person if you live in Columbia or Greenville. I had the chance to chat with Ben after his show in Atlanta and it was a treat (the show and the interview). If you haven’t heard of him, Ben is known for his style of one-liners and including music in his act. Ben also contributes music to the web documentary series Modern Comedian, which is put out by PBS digital studios and amazing.

We talked about comedy, cities, and poop. Check it out and then look at the video clip and then come to one of the shows listed. And also buy his Half Hour on iTunes.

Justin Thompson: You’re touring all throughout the southeast. A lot of the cities will be new to you, right?

Ben Kronberg: Yeah, I’ve only been to Atlanta, Nashville, and Chattanooga. Everything else is fresh.

JT: Are you excited? What are you expecting?

BK: Hospitality. Nah, I don’t know. Nothing, I just don’t really like to expect things because you’re supposed to project yourself into the world without expectations. It avoids disappointment, not that I would be disappointed, I just like to see what they day brings, what the show brings, and what the places bring.

JT: How long have you been doing stand-up and playing music?

BK: I’ve been doing stand-up for eleven years. My mom made me take piano lessons, but I never liked the piano, I always wanted to learn guitar. I didn’t pick up the guitar until my last semester of college, which was kind of too late to get good at it in the way that I wanted to. Or that I thought I wanted to. So I would just make up stupid songs and those songs that I occasionally fooled around with turned into “Do it at an open mic” and “Do it at the comedy club” and then “Wait, you’re a guitar hack, start doing jokes.” So I started doing jokes.

JT : So you weren’t playing in bands and then started doing comedy.

JT: What kind of music do you listen to?

BK: Anything really. Today I was listening to Damien Jurado’s new album on the way here. Which is produced by Richard Swift, who I also enjoy. He’s a really cool producer who lives in Seattle. Damien’s songs sometime sound like it might be Neil Young , but he has his own vibe too. I also like electronic music, like LCD Soundsystem. Things that are more dance-y, upbeat. Energy. I like it all, really.

BK: I do Spotify, so I will discover and rediscover stuff. Lately I have really been liking The Alan  Parsons Project’s Eye In The Sky.

JT: Did you always know you wanted to do one-liners and songs?

BK: I started with music,so songs. I think the nature of doing musical comedy or songs, lyrics are kind of one-linery. You know, usually one line in a song will set it up, with the next line is a punch line. It just sort of naturally happened.

JT: How was SXSW?

BK: It was awesome. It was awesome because I didn’t get hit by a car that ran into a group of people. That happened right after I left. That was awful.

JT: You started in Denver, right? And you grew up around there? What was the scene like?

BK: Yeah. It was cool, there was a club. There were the veteran comedians and people doing stuff. I think when I started it was sort of a part of the next wave of comedians that would bring attention to Denver. Roseanne Barr is from Denver, so Denver had some heat to it, but it’s this really great scene and I go back there a lot.

JT: Do you work out a song on stage, or is it done and then you perform it?

BK: I’m always adjusting, I think. It’s kind of the jist of it, but the thing is the song I did tonight was a compilation of multiple songs. To do more than one of those, with the law of diminishing returns, it’s like “I’m going to do that again.”  I try to make it special, that’s all I’m trying to do.

JT: Are there any other musical influences that you have?

BK: I like Cody Chesnutt and his sort of sexual vibe, there is humor in it, but it’s also legit. So that idea of doing not just a schticky musical comedy, but upping the ante and having it be a cool song that you might listen to and not just think this is…Who are the dudes…the fat Flight Of The Conchords?

BK: Yeah, Tenacious D, you know the fat Flight Of The Conchords.

So I guess whenever I’m trying to take from something, it’s like I’m aware of that stuff, but I want to do my own thing. I want people to see me and create a new category as opposed to putting me into one.  With a lot of my jokes and one-liners, people will compare me to Mitch Hedberg, which is awesome and I always never not like, he’s one of my favorites. he is one of my musical influences.

JT: When you pick up a guitar, people are very quick to compare you to other musical comics.

BK: Yeah, comparisons are cool, so you don’t want to completely eradicate any sort of likeness, but also create a uniqueness.

JT: To me, that’s how stupid people process it, they have to have a reference.

BK: “Oh you mean you’re a comedian, like Jerry Seinfeld?” It isn’t really like that. Stupid people.

JT: But you want them to come to your shows.

BK: I want them to Google “Zach Galifianakis” but also see something about me.

JT:  You moved to LA after Denver?

BK: Yeah, i moved to LA and lived there for a couple of years, but now I’m in New York. I’ve been there for the past four years.

JT: Why did you moved to LA first instead of New York?

BK: I had representation at the time that were located there and they kind of leading me that way, and then when I got there, there enough stage time, and it wasn’t about the comedy. It was about opportunities to audition and stuff, which i’m totally into but the thing that brought me there was my stand-up. It was like developing a skill, but then stopping that development to develop other things, which felt counterproductive to me. I went to NYC and i’m like “I gotta live here” and that brought me all the opportunities that i’ve had. Now i can go back to LA and do stuff there occasionally.

JT: I asked because it seems that NYC is for stand-up and LA is for writing and acting

BK: You can do both in both places, it’s just the ratio of opportunities is more for performing in new york and writing/acting in LA. You can definitely make both things happen in both places

BK: Working on an astrology, but it has to do with poop so it’s called Asstrology, A-S-S-trology. So you know, a bathroom reader, that is usually where I read. Something for people that are into poop, that target market of poop people.

JT: Do you consider yourself to be an introvert or extrovert?

BK: I don’t really know, i’m both. Typically i like my alone time, but i like performing, which to doesn’t make me an extrovert per se. I’m a combo, i’d say.

BT: I probably identified with – even though i’m not pro-military, i like Guile. I like his style. I’d always wanted a really cool flat top, but i was never able to get it because my hair was too thin. So for hair, Guile.

JT: Are you big into video games?

I like the older style, like those profile fighting games. I’m not big on the first person games. I get enough first person being alive, I can walk around and shoot people.

JT: I’vee got to ask, do you have any advice for people pursuing music or comedy?

BK: Just do it. i think that life is too short to even question, though i question what i’m doing all the time, but life is too short if you want to do something. A lot of people dip their toes into comedy, and a lot of super funny.people. It’s similar with music, people that are super good.

Move to a place where there is a scene or if there is not one and you can’t move, make a scene. Contribute. Start an open mic or something. and build, let the mold grow. and create.

JT: That definitely applies to a lot of your stops on this tour. Thanks for doing the interview.

BK: Thanks for having me.

Follow Ben on twitter @benkronberg and watch a clip from his Half Hour and his episode of Modern Comedian below:

The Half Hour
Get More: Watch More Stand-Up. 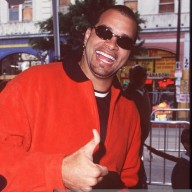