Comedian Joe Pettis has created two of the best shows in Atlanta: Beer and Comedy Night, a twice-monthly show held at SweetWater Brewery, and Underwear Comedy Party, held once a month at the The Village Theatre, which is of course stand-up comics performing in their undies.Â  In 2010 he was voted Creative Loafing’s “Best Local Comic” and regularly opens up for Doug Benson, and has been a guest on his podcast Doug Loves Movies.

Joe’s act reflects his lifestyle, with jokes about dating, traveling the country, and partying. He also laughs a lot on stage. He is having fun, which is part of what makes him such a great host for these shows. He really loves what he is doing: turning a show into a party that you want to take part in. Often at the underwear shows he invites the audience to get in their underwear as well, which sometimes comes with a deal off admission.Â  Starting this year he has taken the Underwear Comedy Party on the road, with support from local comics in over 20 cities.

“I said “bless you” to a dog after he sneezed, which was pointless because all dogs go to Heaven”

I interviewed Joe before the three-year anniversary show at SweetWater Brewery to promote upcoming dates in SC. Folks were already lining up to enter before the doors even opened.

Justin Thompson: How did SweetWater show get started?

Joe Pettis: We started here three years ago, the Monday before their annual 420 fest. I was doing these theater shows out in LA where they would charge admission but give out free beer. So I posted on Facebook and Twitter, “Does anyone know of a venue in Atlanta where we can do this?” and SweetWater actually wrote back, “Why not back the brewery?” and I wrote them back. They jumped at idea and I have always loved SweetWater, but never dreamed of doing a brewery show.

JT: When did you bring in the DJ?

JP: Last year, the two-year anniversary show. DJ Durtty Martinez has been a good friend of mine for a while and he was coming out to the shows and he kinda hinted that our sound system wasn’t great and that the show would be better with a DJ.Â  It’s another personality that gets added to the show.

JT: And how did you start the Comedy Underwear Party?

JP: Our first show was last August at The Village Theatre and we only did one road gig last year. The tour started this February. I was already doing shows at Village since last January. We started doing themed shows there, like a Twitter based show, a nerd comedy show, every month a different theme and then I was like, “Let’s do an underwear show!” and that show was so much fun. It was a phenomenon, so I dropped the idea of changing it.

JT: What other cities have you taken to the show to so far?

JT: Any that stood out in particular?

JP: Baton Rouge was awesome. It was my third time there, at this space, this venue called the Station. It’s an amazing room, and they do weekly shows that are amazing. Omaha was really fun. Chattanooga and Knoxville have always been great.Â  We’ve done Chattanooga twice and both times were phenomenal. That room, JJ’s Bohemia, has always been great.

JT: Do you really use Tinder as a source of promotion?

JP: It’s funnyÂ  because about three or four shows ago, I was doing this joke about Tinder here and this girl came up to me and said, “Hey, I come to these shows because I saw it on your profile.” On my profile it says, “I host Beer and Comedy Night at SweetWater Brewery every other Monday,” so she saw it and she didn’t right swipe me, she didn’t like me, but she started coming out to the shows and has been to five or six now. She brings a crowd of people every time too. It’s funny, I didn’t like you, but I did start coming to your shows. I don’t want to date you, but I love coming to your shows.

I’ve been on so many Tinder dates and hardly ever get a second date, but she has been to six of my shows, that is way better.

And half of my Tinder dates I end up bringing to the brewery anyway, because I get free beers.

JT: Is it hard to travel when youÂ  don’t have a car?

JP: It’s really easy to get around Atlanta, I’ve been doing MARTAÂ for two and a half years. I know exactly what time the buses are leaving the stations. For shows out-of-town by myself, I travel a lot on Megabus and just have locals on the shows. I’ve easily done over 100 Megabus trips, but it’s cheap.

JT: I love that, it’s a different way to tour and your shows aren’t just about you, since it’s harder to draw folks if you were headlining and no one knows you.

JP: One, it’s a fun show in general. “Underwear Comedy, I want to see that.” Two, “Oh,Â  my friends are getting in their Underwear!”

I’ve been doing this brewery show for three years and to me, hosting is way more fun than anyone else. If you have the right crowd and environment, it’s the most fun you can have onstage.

Â I’ve put in the work and I know for every successful show I’ve run, I’ve probably had 5 failed shows. I’ve learned my lessons, Â what kind of venues and spaces don’t work.

JT: I also like how you put an intermission in the Sweetwater show.

JP: That was actually an audience members idea once. When we had one of the smallest crowds here, this person just yelled out, “ I want to smoke, anyone else want to smoke?” and then I was like, “Alright let’s take an intermission.”

I just the did the Huntsville, AL show, Epic Comedy Hour, and they do an intermission and it worked out. It gave everyone a chance to relax, especially if it’s a drinking crowd. Without that what probably happens is that by the 5th or 6th comic, everyone would get up to use the restroom and smoke. With it, folks will still get up, but it’s nice that they know that if they wait they can all go at once.

JT: How did you come to work with Doug Benson?

JP: It was actually Twitter, I was going to Ohio and I saw that he was in Cleveland. I was there the same day and didn’t have a show, so I hit him up and said, “Let’s smoke or maybe I can get a guest spot” and he said, “ Do you want to host the show?” and then I just kept in contact after that one. I try not to pester him too much, but every now and then I hit him up.

JT: Do you have any good bus stories?

JP: Coming back from Jacksonville, I go there a lot because my family lives there and I always do the overnight bus back. Recently there was this woman, she looked pretty bad, messed up. She was yelling, “It’s fucking cold on this bus!” I always carry a blanket and I wanted to give it to her, be a good guy, then maybe she will be quiet and I can go to sleep. As soon as I was about to do that she gets a phone call. “Yeah I will be there in 11 hours. I charge $150 for a half hour, $250 for an hour.” That’s when I went, “Holy shit, this woman is a prostitute! You’re not getting my blanket.” If I was a better person, I probably still would have given it to her.

Coming back from D.C. this woman got on the bus late at night with her baby and I was thinking, “Please don’t sit next to me.” Of course she sits right next to me. The baby was super quiet so it wasn’t a big deal, then at one point I went to sleep and when I woke up and she was leaning on me and the babies head was on my arm. I normally hate kids, but then I was like, “Oh, alright.”

JT: That’s how you know you’re growing up.

JP: I’m slowly making the transition from a pothead to an alcoholic, I call it growing up.

JT: Any music you’ve been into lately?

JP: Unfortunately I haven’t been to any concerts lately because I’ve been doing this so much, but there are so many good festivals coming up.

I’m really into this band Tenniscoats, this guy and girl from Japan. I found them on this thing called La Blogotheque, they do these things called Take Away Shows and have them perform in a public space. Tenniscoats did it in Tokyo, walking down a train line and you can hear that with the song. It’s really cool, I really enjoyed it.

JT: What is next for you?

JP: For the most part I am focusing on doing more underwear shows, but I want to do on more brewery shows. Thomas Creek this week was also a Twitter thing.

I was drinking a Thomas Creek beer so I tweeted “I’m drinking your Up The Creek IPA. I think in the morning I will be up shit creek.” Then five minutes later I tweeted, “Oh by the way I do a show at SweetWater and I would love to do a show there.”

And then in the morning I forgot I had sent those tweets and they were like, “Oh yeah, email us!” The guy I have been working with, Josh, has been really great. 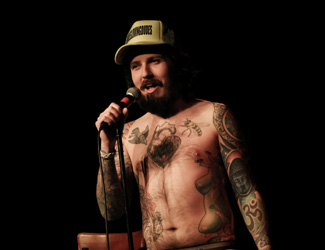 JT: Any weird experiences being in your underwear on stage?

JP: Pensacola, this last week, I had women come onstage and grab my dick multiple times and then offered me money to see it. That was weird, that’s never happened.

I had a guy in Milwaukee and he was heckling, right off the bat. I try not to fight with hecklers but he just kept going and eventually I said, “Hey if you’re going to heckle, you have to get in your underwear” and then he gets up and starts walking to the stage and I was like, “Oh shit!” He tried to get the mic and I was like, “No, dude, you got to get in your underwear” and he was wearing Joe Boxers, which I didn’t realize was a thing anymore. I said you, “Oh you are wearing underwear with my name on it, how did you know?” Then he left us alone for the rest of the show.

That was a 7pm show on a Saturday.

JP: Just do it get up as much as you can and be very humble about it. Don’t expect anything, but strive for everything. Be humble and be respectful of everyone, be nice to everyone, not because they might help you out one day because that is the way to do it.

I think a lot of people when they start out get arrogant about it, including myself especially. And they think way more of themselves then they should, but eventually it becomes a humbling experience, unless you are humble when you start, then it’s much easier.

When I first started, I thought five years in I would be on TV and headlining comedy clubs. I’m nowhere near that but I’m so happy with what I do have. It’s fun. I’m having the time of my life. I’ve got my own thing going, which is good.

JT: Thanks again for doing the interview.

Check out the following shows in SC!

And don’t forget to follow Joe on twitter @joepettis and check out all of his websites for more details!