I very quickly realized while watching the Trouble the Youth shorts in the Nickelodeon Theatre yesterday that these were not popcorn-munching movies. Comprised of five films with subjects ranging from the war in Afghanistan to school shootings, this block was pretty heavy. I was going to have to keep my chewing discreet.

The first film, “Helpless”, entered by the North Carolina School of the Arts and directed by Christene Hurley, is set in an even quieter than normal school library. Two students are hidden between two shelves of books, a girl lying down with her head on a bookbag and a boy lying next to her, interrupting their light-hearded conversation about prom every so oftenÂ so sit up and peer through the shelf towards the door, looking terrified. I surmised fairly quickly that we were seeing a school in lockdown modeÂ during a shooting, and that the female student, who was only being shown from the chest-up, was likely mortally wounded out of our field of vision. Though this ending was fairly easy to see coming, it was still powerful thanks to the lovely job done by the two actors. 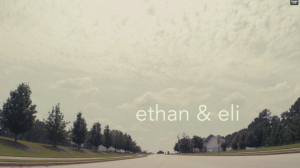 “Ethan and Eli”, directed by Katrina Albright, centers around two 17-year-old boys killing time in a small Georgia town the night before one is scheduled to leave for Afghanistan. Vignettes of the boys attempting to purchase non-alcoholic beer in a liquor store wearing fake mustaches and later almost getting arrested for simply being out past curfew–which theyÂ onlyÂ get out of after Ethan explains to the cop that his friend is about to ship out–were effective in pointing out our country’sÂ hypocritical definitionsÂ of adulthood. The interactions between Ethan and Eli are a good example of when, in film and in life, what’s unsaid means so much more than what’s said. It’s hinted at from the opening shots of the film showing Ethan reading Slaughterhouse-Five that he doesn’t agree with his friend’s decision to join the Army, but he doesn’t know how or even want to talk to him about it. After the cop shows up and interrupts their finally beginning to have a real conversation after a somewhat forced-feeling scuffle in a parking lot, it doesn’t come up between them again. Aside from thisÂ weird half-fight, the acting between the boys felt subtle and real, though the same can’t be said for their mothers in the film. Albright revealed during a talkback following the filmsÂ that the story was based on her little brother, who was represented by the Ethan character, while her real-life brother played Eli. 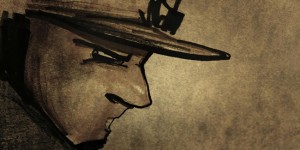 Third was “John’s Farm” by Melissa Sweazey, a well-made, brief exploration of a father’s fear about loosening his parental grip on his son and letting him experience life. Fourth was an ambitious animated short directed by Danny Madden, “Confusion in Sand”, and while its choppiness was clearly deliberate, I found myself wishing it could have been done in a slightly less jarring way that didn’t give me motion sickness. I got more accustomed to it as the film went on, though, and was impressed by the amount of emotion the animator was able to portray in the simple features of the soldier’s face. I looked forward to every close-up.

It took me a minute to get used to the smooth camera-work in “Locker 212” after “Confusion in Sand”, but then I got to see the short I have the most conflicting feelings about. The film opens with two boys at their lockers and seems immediately like it will be a story about bullying. I nearly groaned when I saw the bully: jeans, white t-shirt, jean jacket, combed-up hair. When he follows his target, the nerdy boy with the locker next to his, into the bathroom and offers him a joint under the bathroom stall, I almost groaned again. When a teacher comes in, catches them and leaves them in a classroom together while he searches their lockers, it felt pretty safe to imagine what was about to go down. This is where things took a turn. We go back and forth between seeing the teacher search the lockers and the boys–the bully, John, and his victim, Bryan–interact in the classroom. Sound is used very effectively in this section, the music getting louder as the tension between the boys builds and the teacher moves on from the John’s locker toÂ Bryan’s locker and discovers the numbers are out of order. AfterÂ Bryan says to theÂ John at the height of their confrontation, “I hate you. I hate all of you,” the teacher pulls a gun from his backpack, and immediately a film about bullying turns into a film about an almost school shooting. It’s powerful, and it makes me wish I didn’t have this nitpicky complaint: when Bryan tells John about the one D he got last semester, it was in shop class, and his dad was disappointed in him. Sound familiar? I just wish they picked something other than shop or left this part out entirely, because it felt like a lazy rip-off of The Breakfast Club, took me out of the film for a moment, and made “the nerd”, Bryan,Â feel more like a type than a unique character.

In terms ofÂ actingÂ as a cohesive block of short films, these five worked really well. I feel like it must have been intentional to open with a school shooting in progress and end with one prevented. I may be reading too much into that decision, if it was even a conscious decision at all, but it felt kind of like a message of hope. These tragic things happen all the time, but sometimes they don’t. I will say that I would have loved to have seen a stronger female presence in these films, but I also would rather a selection committee pick the best entries without feeling a need to meet any sort of quota. And while they may have been a dearth of female characters in these films, three of them were directed by women, which is great to see. The Trouble the Youth shorts tackled some very difficult topics and featured some seriously impressive performances from young actors, as well as a few from adults.Â  (I know I didn’t go into much detail about the plot, but the father in “John’s Farm” was fantastic.)

After this block, I’m excited to see the rest of the short films Indie Grits has to offer. Next on my schedule are the Nickapalooza shorts Saturday afternoon at Tapp’s. I hope to see you there!