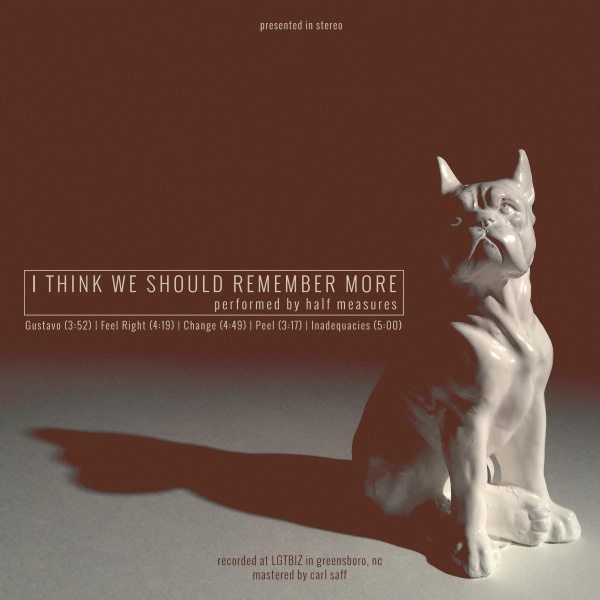 For Half Measures frontman Walter Roesch today, the release of the bands first single off their upcoming EP I Think We Should Remember More,Â has been a long time coming. This five song EP started to see the light of day four years ago when Roesch wrote the opening track “Gustavo” as a jumping off point for his previous band. For Roesch that song turned into something more as he branched off and kept writing songs in the same vein stylistically.

Overall it’s been a slow process, but 2014 finally saw the band take a huge step forward with the recording of their first EP at LGT BIZ in Greensboro, NC. The band had previously demoed material with Chase McGuckin, who in turn ended up joining the band on drums along with Alex Koss on bass. The trio pack punch, with songs that hinge on emotional dynamics and powerful slow burning songs that drip with heartfelt lyrics.

Choosing to record at LGT BIZ was an easy decision for the band. Known best for some of the hardcore recordings released from the studio, many of Half Measures modern influences and contemporaries have recorded at the North Carolina studio recently.

“Honestly hearing the recordings that bands like Junior Astronomers, Ivadell, and Darkentries did at LGT BIZ made the decision pretty easy for us.” said Roesch.”We had a pretty clear vision of what we wanted sonically with this ep, in that we wanted a raw and almost live sounding record that essentially portrayed Half Measures in its truest form. We didn’t want any bells and whistles, we wanted people to be able to see us live and not be disappointed when they heard the record.”

So far Half Measures have played shows here and there, but the trio views this EP as a fresh start for the band with hopes of playing more out-of-town shows and focusing on building a fan base outside of the Columbia music scene. Each band member has somewhat of a pop-punk background that can’t help but bleed through at times on the album. Guitarist and singer Roesch has been playing in bands since he was 15, but received the most recognition playing in Columbia’s A Brighter Life and touring with now defunct band FeraÂ as well has his own project Clever Words. Bass player Alex Koss also spent time playing in A Brighter Life and McGuckin’s played in several bands including Antidrive. With this new EP they’ll look to move forward collectively with this project.

On December 27 Half Measures play the Radio Room in Greenville with Broken Circles Records artists Slow and Steady – fronted by Greenville, SC native Jacob Lawter – as well as Ivadell who’ve risen quickly as one of the top bands in South Carolina.

“Jacob (from Slow and Steady) and I started off playing shows together when we were like 16 back in Greenville so it’s awesome to still be doing it today.” said Roesch. “Hopefully our bands are a little better now than they were back then. Ivadell is probably my favorite band making music in SC rightÂ now, especially live.”

On one hand Half Measures hope people dig the new EP and find a wider fan-base. On the other, they’re happy to just be playing music and doing what they love. Music’s the main creative and emotional outlet for Roesch and it’s been that way for a long time. Every music loving kid has that moment where they find something new that they connect with for the first time. For a lot of kids it’s some embarrassing band they look back at and regret, for Roesch it was a live Blink 182 album in 5th grade. Say what you will, but they’ve become one of the most influential bands of their era. Roesch is modest with his hopes for this release, but hopes people find a similar connection to his music.

“I write for myself, so when people genuinely feel that and connect with that, it’s cool as hell. Even if it’s like 10 people.”