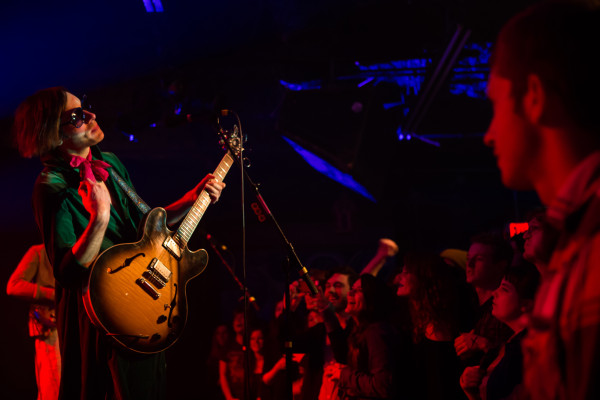 Kevin Barnes pulled together the eccentric soulful rock that is of Montreal in 1996, and still delivers an amazing live experience nineteen years later. The group has become all too well-known for the endless action on-stage full of odd characters – a boxing horse, fighting politicians, ghost-angels, masked wrestlers and pigs, just to name a few. It seems as though time has proven to only favor the musicians as the more of Montreal produces, the more unexpected the show becomes. Of course, they always play favorites and recent releases, but the rest of the set list is left to be determined fromÂ their twelve records (not including Aureate Gloom, to be releasedÂ March 2015).

Charleston welcomed of Montreal to The Pour House last Wednesday, which was their first show in the city in about two yearsÂ according to the masked ringleader that spoke, or rather just ranted, beforeÂ introducing the band. Nedelle Torrisi, an L.A.-based indie darling and violinist complete with a serenading voice started off the evening. She accompanied of Montreal for the entire month of January, but beginning in March the tour will carry on with different opening acts includingÂ Yonatan Gat,Â Deerhoof andÂ Yip Deceiver. Ultimately, it was a sold out night and they treated the crowd to confetti, feathers and material from their aforementioned upcoming album (specifically,Â Empyrean Abattoir).

It isÂ the predictable unpredictability offered by of Montreal that keeps them alive; no one can guess what they’re going to experience, they just know it’ll be unconditional and fun.

And I’ve Seen A Bloody Shadow

The Party’s Crashing Us

*Unfortunately, I compiled the set list based off a hazy photo. I did my best, but am also fairly certain they played “The Past Is A Grotesque Animal,” “Bassem Sabry” and “Heimdalsgate Like A Promethean Curse.” I just couldn’t remember the order. If you know, please do tell.