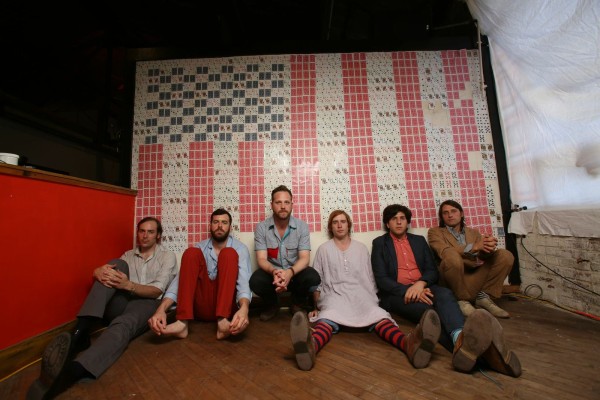 It is absolutely crazy to think that Dr. Dog’s first studio album ToothbrushÂ was released in 2003. Since that self-released debut, the Philadelphia-based group has gradually climbed to indie stardom through their road-dog lifestyle, opening for notable artists like M. Ward and My Morning Jacket, and refiningÂ their musical aesthetic. Their consistent progression, especially as seen through their last two studio albumsÂ B-Room and Be The Void, has helped them toÂ develop a strong following toÂ headline and sell out their own tour.

What began as the duo ofÂ Toby Leaman and Scott McMicken with their recordingÂ The Psychedelic Swamp,Â evolved into the current six-piece lineup that welcomed rhythm guitarist Frank McElroy, keyboardist Zach Miller, drummer Eric Slick and multi-instrumentalist Dimitri Manos into the mix. Together, they create the folky, bluesy, indie, twangy rock that is Dr. Dog. Incredibly catchy, carefree and irresistible to dance too, they speak to the circumstances of life whether it be the ease of feeling Lonesome or the difficulty of your desires always being just out of reach, like an Old Black Hole. Not to mention, their crafty lyrics communicate those themes in such a relatable manner: “There’s an elephant in my head, and I tiptoe around it.Â There are egg shells on the floor, therefore I never touch the ground.”

Their early 2015 tour is in supportÂ of their first live album, Live at a Flamingo Hotel,Â which was released in January. I had actually pre-ordered the vinyl and after spinning through the first few tracks, my anticipation to see them live was overwhelming. Of course, it opens with “These Days,” which is probably one of my many self-declared anthems – how could it not be with the lyrics,Â “I don’t wanna let go. People they get so old. I hate when people say,Â those were the days. What’re these then?” As compared to the studio, the live recordings capture Dr. Dog’s energy two-fold; there is enough of the crowd’s enthusiastic cheers and McMicken’s banter woven into aÂ quality recording. Not to mention the album includes their Architecture In Helsinki cover, “Heart It Races,” which fits their style perfectly.

If you’ve yet to jump onto the Dr. Dog bandwagon then consider this a huge favor.

For those who weren’t able to snag a ticket forÂ Asheville, check out the rest of their tour dates on the East Coast and keep an eye out for festival appearances this summer.