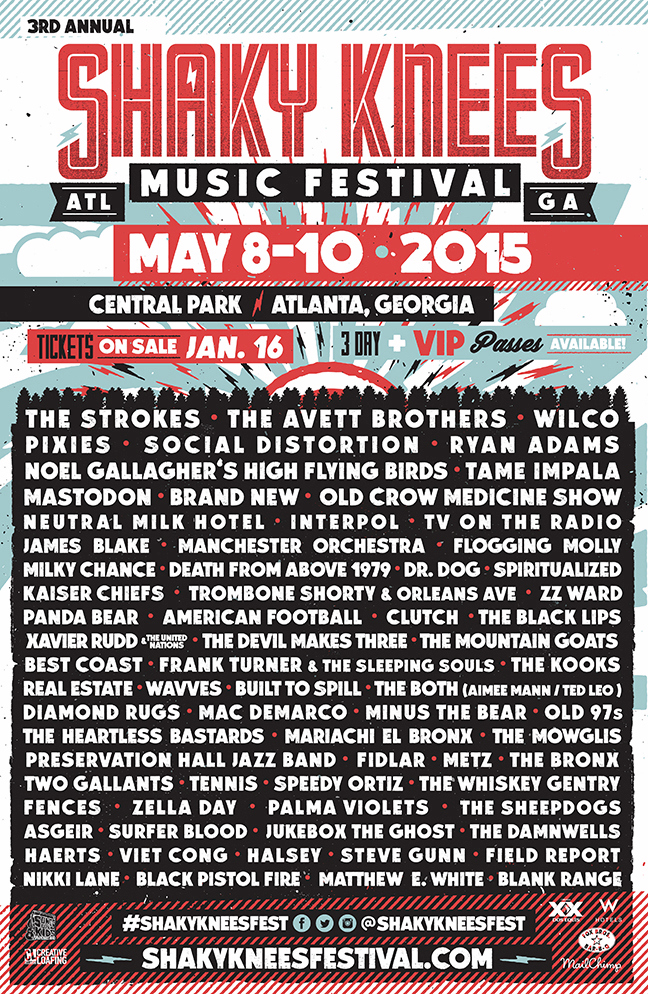 With week two of Coachella wrapping up this weekend all eyes will turn to Atlanta and Shaky Knees Music Festival and their strongest lineup to date. In January there were successive days where festivals across the country announced their 2015 lineups, with Shaky Knees not only being the best of all, but one that’s in our backyard. When Mac DeMarco is listedÂ on the 13th line of the poster, you know the festival is stacked.

This years lineup offers a varietyÂ when it comes to age demographics with top headliners like Wilco, Pixies, The Strokes, and Noel Gallagher appealing primarily to the 30 and up crowd and then a scattering of hot names like Speedy Ortiz, Mac DeMarco, and Fidlar bringing the energy earlier in the day. From top to bottom the lineup is appealing, combining established, yet still up and coming acts with some of the all time greats of rock n roll. The one variable that Shaky Knees can’t control is the weather, but their location in Central Park this year will hold up to the heat, and hopefully to the rai….we’re not evening going to tempt that line. No muddy knees this year, although it did make for a very memorable and fun first year.

When you think this Shaky Knees lineup can’t get any better, it does. With bands like Brand New releasing new music (holy shit “Mene” is great) each band is rising in relevancy the closer we get to May 8. 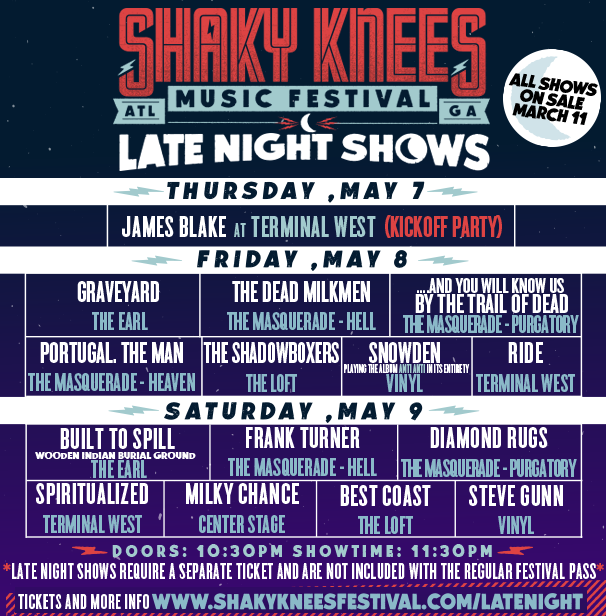 If you didn’t get enough music during the day, the late night lineup of shows this year bring another level of excitement. Spread out over several venues in the Atlanta area, some closer to Central Park than others, each night features exciting shows sure to sell out in a rush. Frank Turner playing in Hell at The Masquerade?? That will be one for the books. Over the last year we’ve had the opportunity to cover a handful of the late show actsÂ from Frank Turner, Spiritualized, Portugal, The Man, and Steve Gunn, to many of the acts playing the festival. The light night shows are great to see acts in a venue setting compared to a festival stage. Do note that the late night shows are a separate ticket than the festival pass.