by Jess Marie Spence
in News
1 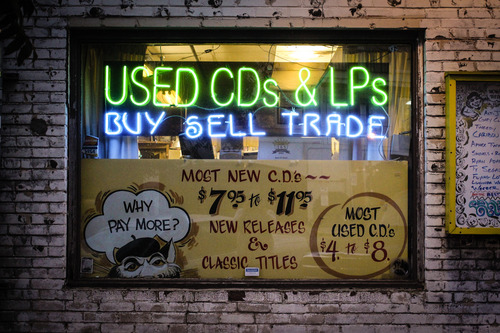 Seven years ago, Metallica’s raucous performance at Resputin Music in San Francisco officially began the annual celebration of Record Store Day. The self-proclaimed holiday amongst the music community has been observedÂ every third Saturday in April ever since. It brings exclusive releases, live performances and more, to fans and artists across the world. The day of festivities observes the strength of a local community that can be brought about by music – at the center of which was, historically, the record store.

In an era whereÂ digital streaming services have conquered the market, the importance of Record Store Day isÂ even more crucial. While it’s fair to say the platforms offered by Spotify and iTunes are likely not going anywhere soon, there has been a resurgence in vinyl sales within the past few years. Perhaps we just realized that the experience of listening to music is lost in our sea of shuffled tracks, or justÂ became lovesick over the authenticity of holding a physical record in our hands, or maybe it was efforts such as Record Store Day that made fans realize that they should show support for the musicians they adore so much.

So in honor of the Saturday, SceneSC has compiled a list of all music events happening in the state’s three major cities. Whether they’re affiliated with RSD15 or not, we encourage you to show some support for the music community. Oh, and did we mention most of the events are free?

While the beloved record store of Columbia isn’t hosting big festivities or in-house shows, their supply of Record Store Day exclusives is probably one of the best in the state. SceneSC has a personal affection for the local store and have filmed several acoustic sessions with local musicians inside its cozy vinyl-filled walls. If you’re looking for a specific release thenÂ you can keep up with them on FB for a general list of the releases they’ve ordered and received (or just give ’em an old fashioned call).

Love, Peace and Hip Hop has teamed up with the Indie Grits Festival to take over Main Street. They’ll be showcasing local hip-hop artists, including three major headlining acts; Nice & Smooth, Monie Love, and Big Gipp of the Goodie Mob.Â One of the major things to note is that it is a family-friendlyÂ event, which has become rare in this genre (so no rolling joints on stage or risquÃ© booty-poppin’). If you’re used to listening to indie rock, maybe take advantage of the spring weather and expose yourself to something a little different this Saturday.

Jason Isbell at the Music Farm

Alabama-native Jason Isbell has captured the essence of a singer-songwriter’s soul and the folky rock of a Southern gentleman. His music has that authenticity that makes you want to move out to the country to spend your morningsÂ sipping coffee on your back porch, drive an old truck down dirt roads and sip whiskey in a country saloon while locals waltz around you. See more details on Isbell here, and tickets can be purchased from the Music Farm here.

Aside from bring the one and only record store in Charleston (no, the vinyl section at Urban Outfitters does not count), Monster Music is providing free live entertainment all day. So even if you’re a broke college kid, like moi, you can still support the music. A few highlights on the lineup are local artists SUSTO and Johnny Delaware, who will also be debuting their split vinyl, and the finale of Milo Green. You can rsvp on Facebook and see more details here.

While Spring Jam is obviously not affiliated with Record Store Day whatsoever, it’s arguably one of the best music events happening in Charleston on the same day. Hosted at The Grove at Patriot’s Point, the lineup features headlining acts Leftover Salmon and Ed Roland and the Sweet Tea Project, along with notable indie rock acts like Delta Spirit and Milo Green.Â Charleston locals, The High Divers, will be performing alongside the national artists too. Definitely worth checking out, see more details and purchase tickets here.

Pop Up Charleston is a local initiative that hosts house shows across the peninsula. Anyone is welcome and donations are encouraged, as the money always goes directly to the artists performing that night. While it also was not directly affiliated with Record Store Day, the performance is perfectly timed. The evening features singer-songwriter Jameson Elder, whose music is a blend of indie-country-Americana-rock, and the red-headed soulful songstress, Hanna Rae.Â For the Pop Up locationÂ and further details, see the FB event page here.

Jason Isbell and The 400 Unit at Horizon Records

Before Isbell drives down to the capital for his performance at the Music Farm, he’s stopping in at Horizon Records in downtown Greenville.Â Accompanied by his talented band of Alabama locals, this will be the 3rd in-house show from Isbell and we can’t wait. If you’re eager to get your hands on exclusive releases, then take note that Horizon will also be opening early at 8amÂ and staying open until 10pm. They claim to have over 425 different RSD15 selections, including the Violence and DestructionÂ release from the Greenville local groupÂ Islander.

Nestled just further down the street from Horizon Records, Earshot will also have a hefty selection of exclusive releases and their own line-up of local musicians. The music begins at 12 with Black Hand Throne, following by Solaire and Coffin Torture – all of which seem to exist in a realm of metal rock, as a heads up for those who prefer to keep the musicÂ mellow in the daytime. Keep in mind EarshotÂ will also be opening earlier than usual at 8am, if you’re looking to just snag the exclusive vinyl.

If you are unable to make it to the events on Saturday, consider Sunday. After all, it’s better late than never, right? Horizon obviously agrees and have scheduled The Honeycutters and Mountain Homes to perform while you browse the remnants of the previous frenzy.

If you know of any other events happening this Saturday, feel free to share them in the comments below or on SceneSC’s FB page or Twitter. Be sure to share whatever you end up doing this Saturday with the hashtag #RSD15 to join in on the worldwide celebration.

[Photos] Brave Baby and The Weeks at Music Farm Columbia

[Photos] Brave Baby and The Weeks at Music Farm Columbia