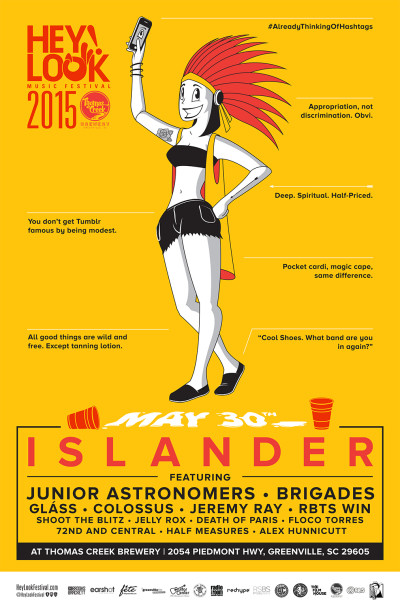 Held at Thomas Creek Brewery, Hey Look! Music Festival will be returning to Greenville for its third year with a diverse lineup of Southern bands.Â

The festival will feature acts like Greenville’s, Islander, and others such as Junior Astronomers, Brigades, Colossus, GlÃ¡ss, Death of Paris, Jellyrox, Jeremy Ray, RBTS Win, Shoot the Blitz, Floco Torres, 72nd and Central, Half Measures, and Alex Hunnicutt. And if you’re familiar with any of those names, then you will know that this festival is going to put out a variety of genres throughout the day. Featuring two stages that are hosted by festival sponsors, Radio Room and Earshot Records, bands will give Greenville an earful all day long. Headlining the festival will be Greenville natives, Islander, who will also close the festival and keep listeners awake through the nighttime hours. Taking the stage at 9:20 p.m., the band will play their mix of post-hardcore and metal. IslanderÂ Â released its first full length, Violence &Â Destruction, through Victory Records and itÂ received positive reviews from outlets like Alternative Press, Substream Magazine, and more.

With a high-energy show and explosive set of songs, you’re not going to want to leave early. And if I had to recommend some tracks, they would have to be “Coconut Dracula,” “New Wave,” and “Side Effects of Youth.” All of the songs unleash the band’s knack for writing strong hooks over heavy instrumentation that is definitely unrestrained throughout the entire record. Let’s just say that I hope they open the show with “Side Effects of Youth.” Being the heaviest song on the album, it doesn’t disappoint as Mikey Carvajal screams the verses over progressions of ear ringing guitar riffs. The song also highlights the band’s ability to mix genres. With heavyset verses, the song quickly translates over into a cleanly sung chorus that resemble alternative rock.

On the opposite end of the clock is Greer’s, Alex Hunnicutt. Opening the show at 2 p.m. on the Radio Room Stage, the local singer, songwriter will look to impress with tracks from his album,Â Running Wild.Â With eight tracks ofÂ acoustically driven blues-rock, the album really does the Upstate music scene justice. Tracks likeÂ “All I Can Say,”Â andÂ “Me and You,”Â show Hunnicutt’s strong, yet simple songwriting abilities and musicianship. He sings in “Me and You,” “Nothing is the same, but you make it all okay.” It’s simplicity like this that really makes Hunnicutt worth seeing on Saturday.

Other highlights from the festival include Floco Torres, Brigades, Death of Paris, and Junior Astronomers. Each of these acts will be bringing an impressive set of songs to the two stages on Saturday. Floco Torres will bring his interesting take on hip-hop to Greenville, as he raps his way into festivalgoers’ ears. The rapper just released his latest album, #DreamBoard, in April and it features seven tracks of innovative rapping over experimental instrumental pieces. Highlights from the album include, “Keep It Movin,” and “Skylight,” which both feature the New Jersey native rapping over a myriad of instrumentals.

Take a listen to #DreamBoardÂ here.

Brigades will show off their fast paced mixture of screaming, punk vocals and power chords to crowds as they play songs from their small, yet powerful catalogue. Having released two EP’s, one in 2014 and one in 2015, the band is now looking to make a quick impression with the release of its first full length, Indefinite. Due for a late-July release, the album has already been teased by the band on their social media with the release of the album’s single, “Enemy.” Let’s hope we hear the song played, because it’s a definite crowd pleaser as singer, Darren Young, proclaims, “Here’s my refusal to be another one of your scapegoats,” over a collection of heavy, fun guitar progressions.

The Columbia four-piece known as Death of Paris may be one of the festival’s later performances, but as every festivalgoer knows the best are saved for last. With a strong catalogue of rock infused indie pop songs, the band may be one of the night’s best performances. Songs like “Shut Up & Kiss Me,” and “New Blood,” are by far the highlights from the quartets latest EP, Gossip. And with a high-energy live show that is led by singer, Jayna Doyle, fans can expect to have a good time.

I consider Charlotte-based band,Â Junior Astronomers,Â to be the second best act at the festival â€¦ after Islander of course. The indie outfit released its album, Dead Nostalgia, in 2013, but has managed to retain attention and popularity through extensive touring and a powerful live performance. That performance is fueled by the intricacies of the guitar work that blend seamlessly with Terrence Richard’s harsh vocal delivery. Interestingly enough, that mixture of sounds equals something along the lines of a punk rock band that has been trained in math rock. Either way, the emotional outpour the band provides will have you jumping up and down as they blast the speakers. Oh and if you don’t believe me when I say the band’s act is intense, just watch their performance of “Touching War,” below. You’re welcome.

Before you go, here are the basics of the festival.Â

See our Hey Look! Music Festival Stage Schedule below to scout out which bands you want to see.Â