Flamingo fever swept over Charleston last Saturday in a display of festive pink plumage and sweet summer music. The second annual Hearts & Plugs Summer Shindig, decked out in flamingo tats and tanks, was a day and night to remember. While last year’s event boasted an ice cream theme and fun times over at King Dusko, this year’s gala was bigger and better than before. The label’s 11 bands, many sharing and trading members throughout the event, were centralized at Palmetto Brewing’s loading dock stage with fest-goers spewing into the busy bar and down the gated veranda in a happy-go-lucky flamingo flock.

There were snow cones and blueberry beers amidst pinball machines and checker tournaments. There was a groovy lawn bird line across the stage and sunkissed hair donning fresh, handmade flower crowns. Most importantly, however, there was an entire 10 hours full of the best local tune-age you ever did hear in one place at one time.

Gold Light kicked off the shindig with a set that got the gloriously sweaty day off to a mellow start. Surf rock elements floated on a lovesick sea amidst a sun-stifled, melancholy daze. The thirty-minute gig highlighted some new tracks off Joe Chang’s Babe EP released this June among classic tracks from 2013’s self-titled debut.


At this point, it was necessary for me to cover my arm in temporary flamingo tattoos, so I took a trip over to the sponge station and got myself some pink ink. I was also sure to snag all the free buttons from the merch tables and pin them to myself so as to fit in with all the cool kids.

Next up was The Lovely Few, a celestial-leaning trio with some precisely-timed electronic beats, heartfelt vocals, and out-of-this-world synth sounds. Though I was a little distracted during this set, I remember thinking thoughts like, “This is nice on the eardrums” and “This goes great with my Charleston lager.” I got to see The Lovely Few back in Columbia back closer to when The Geminids full-length was released and must say it was one of my favorite local discs of ’14 and not just because of the super sweet interstellar theme.

Hermit’s Victory gets my sincerest apologies of the day, since I left during this set on a food hunt in which I discovered the best mint mojito popsicle I’ve ever devoured in my life. I am in fact positive that Tyler Bertges’ bedroom tracks did not disappoint. This is because by the time I came back the crowd had spread from the safety of the shaded tent zone to the sunbeamed outskirts closer to the stage. Also, word on the street is that the backup included Hearts & Plugs founder Dan McCurry on bass. There’s Instagram evidence to prove it, too, so it must be real.

*Hermit’s Victory take their self titled debut album to another level live, with grooving beats and live horns at the show Saturday. Seeing them for the first time, and having listened to the album many times, I was blown away with their live performance. The album is a headphone listen, made up of intricate late night soulful pop music. Live Tyler Bertges has put together a band that takes those songs to another level that help set an easy going tone for the rest of the day. – David StringerÂ

After slurping down my mouth-watering pop amongst a bed of nachos that were equally as glorious, I managed to find my way back to Palmetto Brewing, where the real scrumptious parts of the day were only just beginning. The High Divers had taken the stage and were full-out flamingo festive with bass player Kevin Early’s beard dyed pink and lead singer and guitarist Luke Mitchell’s short-sleeved flamingo-patterned button-up. This group was committed. They also spit out some pretty gnarly rock n’ roll jams.

Michael Flynn took the stage next with his adorable daughter in tow as the set-up began. She was rocking the coolest pink flower sunnies with matching sound-cancelling headphones (to protect her pure hearing; it’s fine, mine has long been lost to speaker blasts and radio ragers). Her raddest accessory, however, was her pink microphone. Flower child Flynn took a squat next to me on a bench with mom and tried to distract me with cuteness. I didn’t give in, and got lost in a dulled down electronic set full of disharmonies, disconnect, discord, and discontent. Flynn’s project is both deep and rhythmic; emotionally chaotic and sonically grandiose. New song “Slow Rider” was debuted, starting off with heavy drumbeats and a super rhythmic funk before coalescing with an unsetting synth-organ grind.

*Mid-set Flynn spoke about the event and said that he felt like he sat at the end of the cool kids table in high school and that no one told him to move. True, there’s something special and hip about the Charleston music scene right now, and the crowd there to support Hearts & Plugs and all of the bands involved. One of the best parts of that scene is that it is inclusive. Also, Michael Flynn was the only musician playing who I still get nervous around every time I see him. This Wayne’s World scene comes to mind. We’re all sitting at your table Mr. Flynn. – David Stringer

Bearded babe Johnny Delaware brought the acoustic folk tunes with a satisfying set and sassy open-shirt statement. At this point, it was really hot, so this was probably necessary and definitely appreciated. I caught another Delaware set earlier this summer at a Pop-Up show, and this wasn’t much unlike that one. Both were extremely in lack of air conditioning and full of good songs.

After a quick checkers break in which I lost every single game I played, I returned to the out of doors to see a blossoming audience- literally. There were flower crowns everywhere, thanks to a local headband maker who was twisting the tulips right before our eyes (believe it or not, this isn’t a euphemism). ELIM BOLT was playing at this point, a reconfiguration of first band Gold Light, this time with Johnnie Matthews taking the vocal reins and Jessica Oliver slaying on drums as before.

The energy ramped up for quirky-crazy ET Anderson, who brought a weird and fully committed intensity. With cutting lyrics and sedated hardcore elements, ET Anderson’s songs are each their own acid trip. Crazed fuzzy guitar bizarreness raged alongside discordant, psychedelic synth blips. Tambourine man was going ham, but Tyler Morris gets the spazz award of the evening. I think his glasses fell off at least three times from all the head-banging, and at one point, he was sprawled across the stage while still shredding on guitar. Glorious.

*Note, this was the first time of the day that members of other bands really crowded around the stage to watch the other bands. It happened with the earlier acts, but not to the degree that ET Anderson pulled them in. Of course, hometown headliners Susto and Brave Baby drew the biggest crowds by far. The reaction of the crowd after their set gave me chill bumps. Loud screams and applause took the band off guard a little bit and filled me with joy. – David Stringer

By the time SUSTO climbed atop the loading dock, the shindig was officially sold out, capped out at 500. With a packed house, cool breezes entering via the nighttime atmosphere, and brews a flowin’, the good times were a rollin.’ I pulled up a spot on corner stage next to a particularly pleasant-looking plastic flamingo to snap a few photos of Justin Osborne and posse. SUSTO is always a crowd favorite with catchy tones yet meaningful and relatable lyrics of love and loss. The fans know all the words for this group, and crowd-singing was in full-force. Newer song “Hard Drugs” was unveiled, though I had heard it before live at SUSTO’s cassette release at Royal American earlier this summer. This one gets real dark real fast with lyrics that include: “Vision of Vietnam / I saw my limbs fall offâ€¦I’m glad that I found you / Sorry I couldn’t keep you.” “Vampiro 66” was a favorite with lyrics, “I promise I won’t bite / I’ll just get you high” and “Acid Boys” was the chosen dance song of the evening.

Everything led up to the anticipated group of the night, Brave Baby. With producer extraordinaire Wolfgang Zimmerman on drums and the best indie rock vibes in the Lowcountry, how could you go wrong? The crowd was fully hype for this one, and it all built up to the finale of the evening, when all the bands stormed the stage for one final Summer Shindig hoo-rah. It was the best of times. 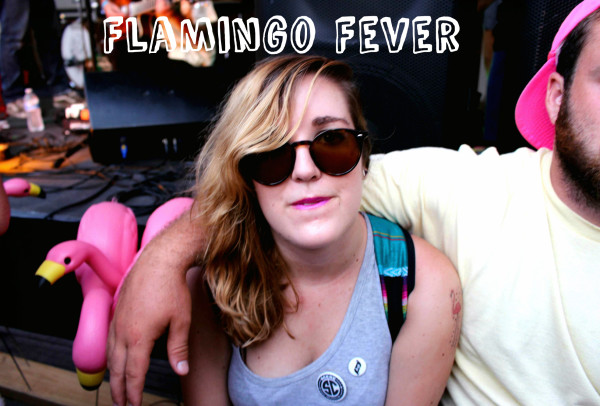 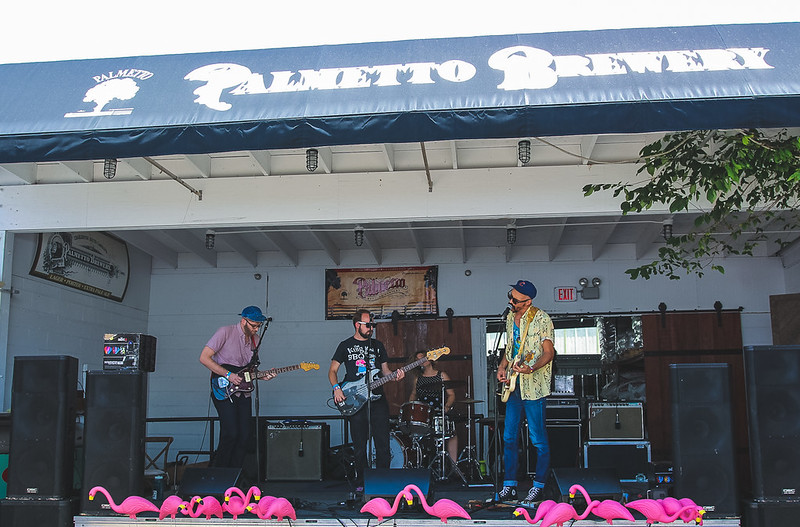