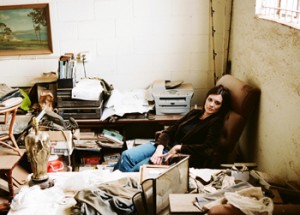 Hannah Miller, one of Columbia’s many fine singer/songwriters, stands out from the pack for the singular power of her voice–a husky, sonorous instrument that has the ability to cast a spell over the listener, regardless of instrumental accompaniment, or lyrical content (think Cat Power). For evidence, just look back to her first, rough-cut EP Storms of Summer or the eclectic, polished folk-pop of her full-length Into the Black.

Her latest, an EP entitled Somewhere in Between, features a set of songs that are the equal or better her past work. Recorded in an acoustic format (with very few other instruments giving the songs minimal color) on an economical budget, it is, in spite of itself, an equally strong statement to the big-budget Into the Black.Â  Her spellbinding abilities are deliciously intact as she runs through seven new tunes that suggest that Miller is only getting stronger as both a songwriter and performer.

The opening number, entitled “Honesty,” is the most light-hearted song in her catalog, but also one of her best. It’s essentially a laundry list of what Miller likes in a relationship, with a tongue-in-cheek conclusion in the chorus that “it’s really rather easy to make me happy.” The song gets bonus points for the kazoo choir in the bridge. Numerous highlights abound, including the urgent plea to a flighty friend “Diana” and the impatient, desperate “Restless.” But Miller truly shines on the ballads, where her voice can achieve the greatest emotional resonance. Witness the title cut or the closing “At My Best,” both of which are elegantly wrought accounts of the ups (in the latter) and downs (the former) Â of a relationship.

You can check out of some of Ms. Miller’s tunes, old and new, at myspace.com/hannahmiller. She will also being playing at the Mellow Mushroom on September 12th for the Free Times Music Crawl.