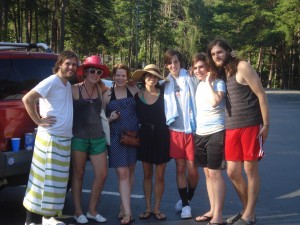 Week 3 of our summer tour has been an eventful one, to say the least. Probably what tops the list is that we received our final mastered album from the mastering house. Alan Douches at West West Side Music (Sufjan Stevens, Animal Collective, etc..) mastered the album, and we are SUPER pumped about it. It’s going to be released September 29th, and we’re beginning the largest promotional campaign of our career to try and build up as much hype about the album as possible. We started by uploading a preview track from the record, “Like Ice in Water” to our MySpace.Â  So be on the lookout for new music over the next couple of months, and start telling your friends about the new Rocketboys record, “20,000 Ghosts” coming in September!

After Maryland, we headed south, crossing the Mason-Dixon line, and played our first show ever in Charlotte on Tuesday at Tremont Music Hall. We made some new friends in My Epic and Jonas Sees in Color. After the show, we headed to Columbia, SC to stay with Daniel’s sister and brother in-law (Megan and Josh).Â  We love staying with them because they always treat us so well. On Wednesday before the show we took their boat out on Lake Murray and did some wake surfing. (see pictures below).Â  Justin saw some huge striper coming to the surface of the lake and he was so excited I thought he was going to jump in after them!

Columbia is becoming a favorite city for us, and this was our second time to play New Brookland Tavern. Our good friend Ben Walker played a great set, and we made some new friends in Kill Anties.

The Rocketboys Climb Stone Mountain from Scene SC on Vimeo.

Thursday we played one of our favorite shows of the tour at the Drunken Unicorn in Atlanta with our long-time friend , Trevor Dowdy, and his bandÂ  I Married My High School Sweetheart. There were a ton of friends and family there and Dear Future and IMMHS played stellar sets.

We had the day off in Atlanta on Friday, and some of the Rocketboys went to Lake Lanier and had a nice time on our friend’s father’s yacht. That evening we hung out with All Get Out at their show at Vinyl with Gasoline Heart while Daniel and Justin hiked up Stone Mountain and watched the laser show after sunsetâ€¦pretty sweet!

Saturday we played in Macon with All Get Out and Rova Zetella while Dear Future drove up to Cleveland to open for Live at The House of Blues. Back in Macon, other than Matt breaking his kick drum pedal during the 2nd verse drum solo of “Like Ice In Water” and Brandon’s vocal mic continually cutting out, and the sound guys not paying attention, it was a great night for usâ€¦. Good crowd and even better friends!

Oh, and Sunday morning, before heading to Nashville, we went to a church potluck with the Wiseman’s. It was great, and this really awesome lady gave one of the most interesting talks I’ve ever heard/seen. She had two baseballs with smiley faces drawn on them and pink ribbons tied to them. One was named Theodocius and the other Friend, and she told this crazy story about Theodocius stealing ice cream from a convenient storeâ€¦.then she saidÂ  “Sin separates you from God!” and then cut Theodocius’s ribbon. Yeah, I’m still not sure what the point was, but it was pretty entertaining!

Dear Future At Exit/In from Scene SC on Vimeo.

Sunday we played in Nashville at the Exit/In, one of our favorite clubs in the country. There was a huge crowd and the energy was so great that night. Definitely one of the best shows yet!

Monday we played our first show ever in Cincinnati and were pleasantly surprised by the turnoutâ€¦afterwards, however, we had no place to stay, so we drove down this crazy back road looking for a campsite, and there was fog and dense forests and everyone was getting scaredâ€¦so we went back to the interstate and ended up sleeping in the woods at a rest area. Other than the ants crawling all over my face and the sound of big rigs pulling in and out, it wasn’t that bad of nights sleep! I think we have to spend at least one night at a rest area for any tour to really be a “tour!”