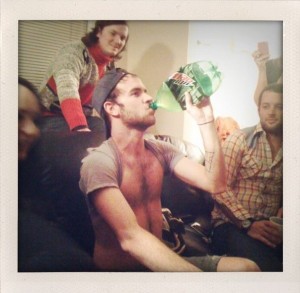 This is the show you’ve been waiting for all year.Â  A show with people and bands that are going places.Â  This is that show you go to on a local level and you look back and say “I saw them before they were_____.”

This will be Austin Crane’s first Columbia show since his hugely successful CD Release show.Â  Austin’s new album Place at the Table has been met with great reviews, plenty of airplay and lots of word of mouth recommendations of the album.Â  I’ll go ahead and tell you now that we at Scene SC think this might be the best record of the year.Â  You’ll have to wait for the list to come out.

We are equally as excited to see Public Radio.Â  The Mark Mathis fronted band from, I guess Charlotte, although the band is a little spread out, will bring their 80’s inspired synth pop rock to New Brookland Tavern.Â  Public Radio are currently signed to Deep Elm records in Charlotte and are pumping their new album Sweetchild.Â  Imagine if Tom Petty made a Electronic/Rock/Emo album.Â  I have no idea what that would sound like honestly, but imagine if Mark Mathis made an Electronic/Rock album with some of his extremely talented friends.Â  That’s Public Radio.

You might recognize Nathan Hussey as the steamy, sultry hot indie rockstar frontman from All Get Out.Â  You might recognize him as that cute bass player that used to play with The Explorers Club, or you might recognize him as that pistol hot guitarist from Firefly Summer.Â  Anyway you look at him he is a pleasure to listen to when he plays solo.Â  While All Get Out is taking time off the road to write and demo some songs for their new full length due out in 2010, Nathan has played a couple of solo shows to test some new material.Â  We’ve seen him solo twice in the last couple of months and both times he has pulled out new songs.Â  He also shows a softer side to his voice than you will hear with his band.

At what point did, or does, or will The Heist and the Accomplice become Chaz Bundick’s side project? His new project Toro Y Moi is blowing up, but The Heist will always the real deal to me. They have been considered one of Columbia’s elite bands for as long as they have been around. This is roughly their third show this year, and maybe their last for a good while, so enjoy the real deal while you can. Soak it up and tell your kids about it.