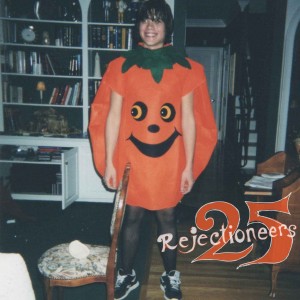 For more than half a decade the 25 EP has been in the works. It’s the first official Rejectioneers release after years of playing live in Columbia.Â  For Ben Walker, this is the first time the recording quality has matched the quality of the songs.

The reason Ben Walker has always had such a core following locally is not only because people love him as a positive influence on the music scene, but because his songs are an open diary that make the listener feel something. What makes this album stand out is the musicianship that Walker has surrounded himself with within Rejectioneers.Â  Christian Tyler’s lead guitar parts consistently compliment the songs without being overbearing, and more often than not the rhythm and drums drive these songs home. These 5 songs wear their influences from the last 30 years of music on it’s sleeve.Â  From Tom Petty moments, to the opening of “Wake Up’ that has a classic U2 feel.Â  What you end up with is a rock n roll record that will stand the test of time, because it’s sound encompasses influences from the 80’s, 90’s and 2000’s.

“Get So Mad’ was the most downloaded song on the 2010 SceneSC sampler showing peoples anxiousness for new material from Ben Walker.Â  That song is on 25, but now has a pre chorus that might throw people off that are used to the SceneSC version.Â  On the first couple of listenens it seemed evasive, but now it doesn’t seem anything but necessary to the song.

For fans, this album is exactly what they’ve been waiting for and has the ability to keep growing Rejectioneers fan base.Â  The real question is where is the second half of the album?Â  Will I be 37 before I hear the LP?

Rejectioneers will release their new EP this Friday August 12, 2011 at New Brookland Tavern.