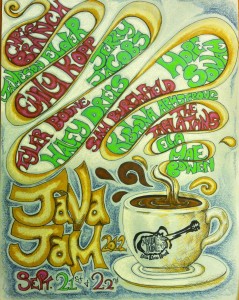 Â On September 21st and 22nd, Moe Joe’s in Clemson, SC, will host their 2nd annual Java Jam. Java Jam is a two-day free music festival, that starts on Friday at 6:00pm and continues Saturday at 4:15. With the creation of the Java Jam, Moe Joe’s has combined two things hipsters love more than anything: coffee and free music. This year, Java Jam has an unbelievable lineup of artists from all over the southeast.

Starting off the event, and one of my personal favorites is Jameson Elder. Elder, from Nashville, TN, was recently a featured artist on NoiseTrade, where he had an extreme amount of success for multiple weeks. His albumÂ The Home I’ve Never Known, combines acoustic ballads, with roots-rock guitar songs, to create an extremely enjoyable album. It should also be noted that the album was recorded at Smoakstack Studios, where Matthew Mayfield recently recorded his new album. Elder plays at 6:00pm on Friday, so make sure to get there for his set.

Also playing Friday is Emily Kopp. Kopp, a native of Orlando, FL, has been busy the past few years, playing with the likes of Michelle Branch, Parachute, and Boyce Avenue. Her EPÂ Potential,Â was released in November of 2011, and consists of 5 soul-pop songs that are support herÂ unbelievableÂ vocals. Her vocals are really spotlighted on the song, “Potential“, where you can hear a heavy Norah Jones influence. She starts at 9:45pm, with the local band,Â The TarlatansÂ following.

Starting of Saturday are hometown folks, Haley Dries and Tyler Boone. Both are releasing new albums within the next month. Dries, now living in Nashville, TN, has been releasing songs off her new album on a series of youtube videos called “On The Dock Sessions“. Her album, “Lady With A Rocket” will be released September 18. Tyler Boone, will also be releasing an album called “Changing Pace” in early October. The album was recorded in Charleston, SC, and features the single “Don’t Forget My Name“, a feel good ballad similar to Jack Johnson.

Closing the show will be Ella Mae Bowen, an artist signed to Big Machine Label Group. Big Machine Label Group is better known for their artists TaylorÂ Swift,Â Rascal Flatts and Tim McGraw. Still, it is only a matter of time before Bowen joins those artists as a household name. Her song “Holding Out For A Hero” beautifully showcases her vocal range, with great backing vocals. Originally from Walhalla, SC, Bowen is sure to join the likes of NEEDTOBREATHE and Darius Rucker as successful artists from our state. Ella Mae starts at 9:15pm on Saturday, and will be a great way to finish a great weekend.

Moe Joe’s has put together a great group of artists. Below is the full lineup with times. Make sure you get out, buy some coffee and enjoy this great FREE music.