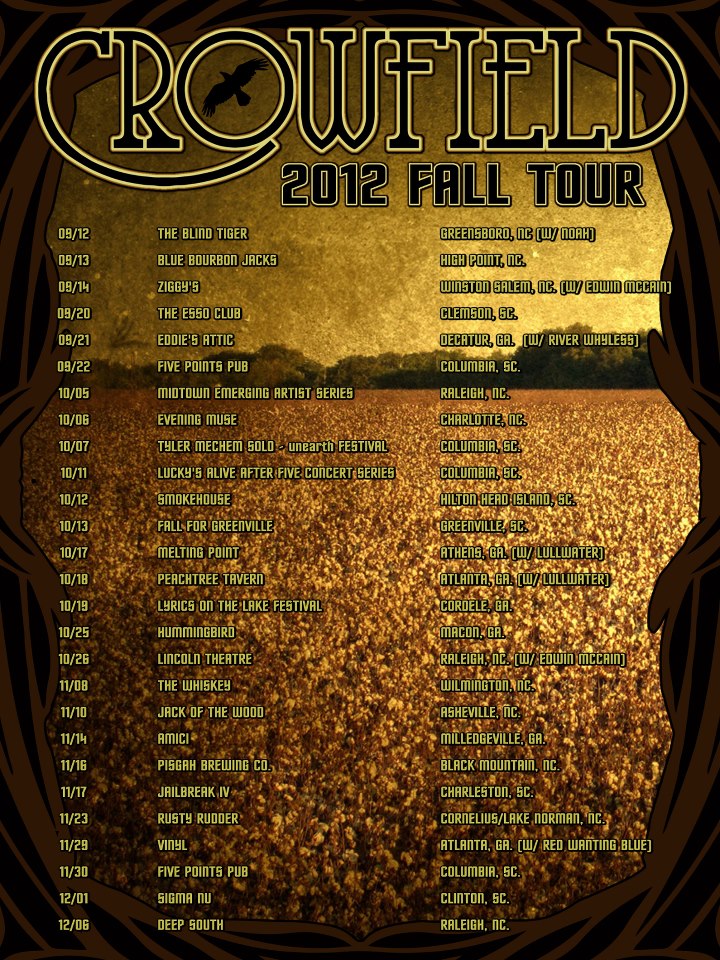 5 Points Pub presents Â Crowfield
Doors @ 9pm
Show @ 10:30pm
$5
What started out as a duo featuring Tyler Mechem and Joe Giant seven years ago has seen the highs of a major label, overcome disappointment, changing of members, and the loss of a close friend.Â  Through it all Crowfield has stayed strong and with The Diamond Sessions have released one of their most powerful albums to date.

In support of the new album, Crowfield is hitting the road playing shows throughout the Southeast. The tour is anchored by college towns and supported on some dates by Charleston’s Firefly Vodka. Others are in support of veteran college rocker turned adult alternative legend Edwin McCain.

Crowdfunding and fanfunding have become popular buzz words in the music industry over the last couple of years. Some people are adamantly against it, others are very supportive. With a goal of $15,000, Crowfield’s Kickstarter campaign surged past that goal with the help of 201 backers and ended up raising over $19,000 for the their new album. The extra money gave the band the opportunity to add some bells and whistles to the album, which focuses on them returning to the easy listening Americana sound that got them where they are today.

The Diamond Sessions was made possible by everything the band had gone through since starting out about seven years ago. After being worn down by the instability of the recording industry, Crowfield turned back to the people who have always been there for them. The fans that have supported them from the start. The ones that they have built relationships with in bars and venues. Ones they met through their day jobs, on airplanes, and through family members spreading the word about their band. When the band needed their fans the most, Crowfield provided them with the opportunity to be there by starting a Kickstarter. And their fans responded overwhelmingly by exceeding their goal.

The greatest honor lies in the name of the album. The Diamond Sessions is named in honor of the bands biggest champion, Johnny Diamond, the late promoter and supporter ofÂ  many lowcountry bands. While things didn’t work out the way they dreamed after signing to Universal Records, it’s given the band the chance to persevere and show their character through an album they wouldn’t have made otherwise. It’s also given their fans a chance to show how much they really mean to them.