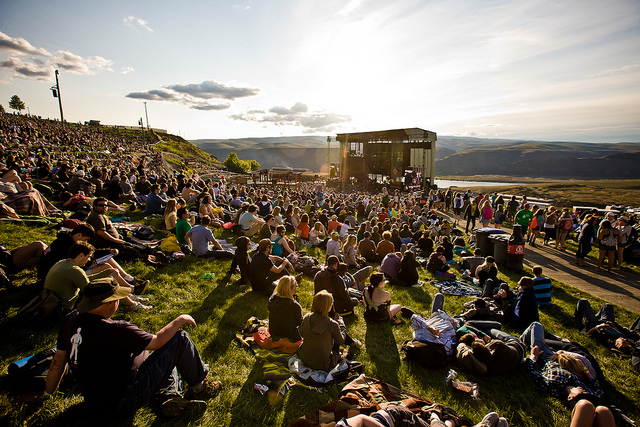 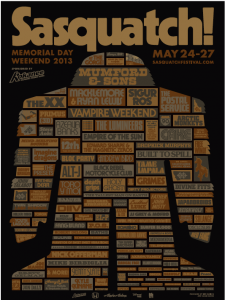 This summer’s festival circuit is already looking to be one of the best in recent years. Already announced we’ve got festivals such as Governors BallÂ and Shaky KneesÂ boasting lineups featuring artists new and old destined to put on an incredible live show. But then Sasquatch Festival goes and announces it’s delicious lineup attempting to blow all other summer festivals out of the water. The winner for best festival lineup cannot be decided until both Bonnaroo and Lollapalooza announce their always fantastic lineups, but Sasquatch are putting themselves at the top of the pack. SceneSC covered Sasquatch last year and are ready to experience this festival all over again. Sasquatch takes place in a beautiful location in Quincy, WA where the party pretty much never stops.

Alright, so as you can see in that poster, this lineup is stacked. However, I must start with the two SC bands Shovels & Rope and Toro y moi. Toro are no strangers to music festivals, having taken over the festival circuit last year, but Shovels & Rope are new to the major festivals, having just released their debut albumÂ O’ Be Joyful just last year. I am incredibly excited that Shovels & Rope are being featured on both Coachella and Sasquatch’s lineups as they are an incredible live band and deserve all the recognition that they are getting. Along with these two gems you have the newly-reunitedÂ The Postal Service,Â Bloc Party, Alt-J, Mumford & Sons, The Lumineers, Nick Offerman, Earl Sweatshirt, Father John Misty, The Tallest Man On Earth, and so many others. As I said in my preview for Governors Ball Festival, IÂ recommendÂ just staring at this lineup for a while.

Tickets are on sale Saturday, February 9. You can check out all the festival’s info here:Â http://www.sasquatchfestival.com/

Yes, I was named after famous british polar bear Rupert. In fact, I was named after a cat that was named after that cartoon bear. This is exactly the reason why Iâ€™d have to say an orange cat is my spirit animal. Though, itâ€™s kind of more like this cat is my spirit goddess. My spirit animal is a bit more like a grizzly duck, which is a grizzly bear with a duckâ€™s beak. Two reasons: 1) When I wake up I am angry and grumble a lot, like a grizzly bear but once I wake up I am (usually) friendly and I quack a lot, and 2) I own a sweater with a grizzly bear on it and one with a duck on it. I am obviously obsessed with music and everything to do with music. I have been to over 80 concerts, I am in a band called One Two Skidoo, and I also co-host a radio show of that same name on WUSC. I was born in a country called London (I would say England, but you Americans seem to be set on the fact that England is only London). I was actually born in Brighton, England, but I donâ€™t wanna confuse you too much so weâ€™ll say Iâ€™m from London. I then moved to a super freezing area of Canada. Youâ€™re probably thinking â€œbut all of Canada is super freezing!â€. Thatâ€™s not true. Well, kind of not true. I do that school thing at the University of South Carolina, and I write about music on this website, obviously. David Stringer is my hero.