Big thanks to Ellis Dortch, a fellow ‘Roo vet, for contributing to this article.

Bonnaroo, more than most other music festivals, is an experience. And if you aren’t properly prepared, it can be an awful one. Follow these guidelines to maximize your weekend, and avoid any potentially nasty mishaps.

SUPPLIES
Gold Bond — Even if your legs don’t touch when you walk, the #1 most important thing to bring to any music festival is Gold Bond. (Bonnaroo 2008 I found myself incredibly chafed and a roughly mile and a half walk to camp. As I slowly made my way back, Vampire Weekend was all I could hear. I HATE Vampire Weekend.) In a related note, you should probably bring sunscreen. 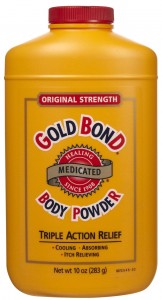 Laugh all you want

Tent — Make sure it is water sealed, as you can bank on rain at least once during the festival (In 2004 it famously rained the entire weekend). Also make sure that it is secured to the ground well so your tent doesn’t go flying into the air.

Shade Tent — In my opinion a must have. The thing to consider is that the sun will start to rise around 5-6am, and its hot by 8am. Your tent, by extension, will also be hot by 8am. Having a shade tent or something like it setup in your campsite provides a shaded escape from the hot box that is your tent.
Chair — the foldable ones are popular. The best way to make use of the aforementioned shade tent is to have a chair to sit in under it. These can also be handy if you’re planning on spending the afternoon at the Main Stage, where there is room enough to bring a chair and not feel crowded, or like you’re blocking anyone’s view.
Water — Bonnaroo does provide water for free, but it will come with a distinct odor of sulfur (eggs for those who have never had the pleasure). It is 100% safe to drink, but I personally cannot stand the smell. I would recommend bring at least a case of water bottles per person.
Food — This will vary largely, depending on what kind of equipment you have, your budget etc. There are a multitude of food options inside Centeroo, most of the “Fair Food” variety (think ferris wheels), and certainly nothing under $6. There is also the ever reliable contingent of grilled cheese salesmen/women. For a couple dollars (1 for $2, 2 for $3 if memory serves and the rates haven’t changed) you can enjoy a handcrafted grilled cheese sandwich that might (!) have a little garlic salt in there too. There is a strict ban on any open fires, but small camping grills and things of that nature are permitted. In my experience the easiest thing is PB&J, granola bars, fruit, and things of that nature, supplemented with a healthy dose of grilled cheese.
No glass containers of any kind are allowed on the farm, so if you want to bring booze make sure it’s plastic. As far as alcohol goes, you cannot bring any kind of liquid other than an unopened water bottle into the stage areas, but you can pretty much do as you please at the camp site.
Clothing — Ladies and Gentleman, I can’t stress this enough: It’s hot. From roughly 8am until the sun sets, expect it to be in the 90’s if not higher. Last year we were blessed with an unreal week of low 80’s with a breeze (and rain on Sunday). I do not expect to be so lucky again. As this pertains to clothing, wear whatever you are comfortable in. You will see a wide range of people in various states of undress (turns out there are people who are pretty comfortable with their bodies at music festivals), so again it’s up to you. Once the sun does go down it can get quite cool, so a pair of pants and a light jacket wouldn’t hurt. Again, expect rain at least once during the weekend.
Shoes — Depending on where your campsite is you can expect to walk a mile or two every day. A solid pair of worn in shoes is the way to go. Choco’s are very popular.
Jumper Cables — someone’s car battery (perhaps yours) is going to die. Be prepared, help your neighbors. 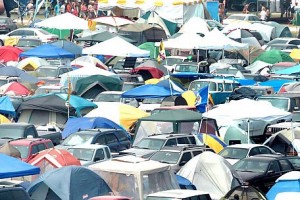 THINGS TO KEEP IN MIND

– When you get to Manchester, there is going to be a very long line of cars. Make sure you have a full tank of gas before you get in line.
– I volunteered all four times I have been to Bonnaroo previously, and only went through the ticket holders entrance once (in 2007), but it went something like this: Every car that enters the grounds is searched, some more vigorously than others. They are looking for glass containers and illegal items (the glass containers rule is actually quite brilliant; with the number of people going barefoot, no glass saves a lot of potential injuries)
– The farm usually opens up sometime Wednesday night or Thursday morning. Generally speaking, those who arrive first get better camping spots (this can be the difference between being right next to Centeroo or being a 30 minute walk from everything).
– There will be between 80,000 and 100,000 people at Bonnaroo. I have never in my four years had anything stolen from my camp site, but don’t be stupid. If it’s important and you absolutely MUST bring it with you, keep it locked in your car.
– There are showers that you can pay, but there are several issues with showering at Bonnaroo. First, there will be lines. Second, it’s hot enough that as soon as you step out of the shower you are immediately going to start sweating again (somewhat defeating the purpose of a shower in my opinion). Third, the sulfur smell. If you insist on showering, I would recommend doing it between 9pm and 4am, while the headliners and late night shows are going on. It’s a lot cooler and most people are either at the shows or asleep.
– Every band on the Bonnaroo schedule this year has at least 100 people who are there to see THAT band. If you want to be in front to see your favorite show, get there early. 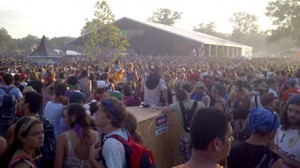 – The late night shows are in my opinion the best part of Bonnaroo. The sun is down, the temperature drops into a much more pleasant range, the stages get full soundchecks etc. I don’t know if Bonnaroo insists on having some kind of elaborate light rig to get a late night slot, but virtually every late night show I’ve seen has been visually stunning (Yeasayer, NIN, and Sigur Ros especially stand out). Even with, ahem, chemical assistance it can be very difficult to make it through a full day. So in the interest of making it to the late night shows, take a nap in the afternoon, or maybe during the headliner that night if you’re feeling brave.

– Related to “Things To Keep In Mind #6”, if there is an act you absolutely must see, and want to be in a good spot to see them, I would suggest getting there early. No later than midway through the preceding acts’ set. For late night shows, a lot of people will forgo the headliners altogether in order to get a spot up close. I feel extremely confident there will be a large contingent of people skipping the Paul McCartney nostalgia fest in order to get a good spot for Wu Tang Clan, as example.
– The Cinema and Comedy Tents are both fully air conditioned, and can provide a nice escape from the midday heat.
– Leaving Sunday night can be a smart move, especially if you aren’t interested in any of the closing acts. Traffic coming and going is always an issue, and you can definitely beat the crowd if you’re rolling out of the farm Sunday afternoon/evening. If this sounds appealing, go ahead and pack up your camp first thing Sunday morning, so you’ll be ready to go whenever you’re ready to return to society. 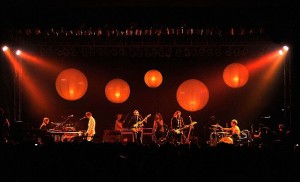 – Bonnaroo was originally considered a “jam band fest” and had a very strong hippie vibe. It has certainly moved away from those roots, and some people would say the feel good vibes have gone with it. I say be part of the solution, not the problem. Be friendly to your neighbors, share what you have and unless they are incredibly low down people they will reciprocate.
– I or someone in my group always carried a backpack full of supplies with us. Moving from the stages to your campsite and back can be tricky and very time consuming. BE PREPARED (i.e. bring lots of water)
– Register your wristband — if you lose your wristband you can get another one. This is critical, in that you cannot get into any of the stage areas, or really anywhere, without your wristband
– A flag/totem pole/obnoxious rage staff is a good idea for both your campsite and if you are with a group. This can be very useful in immediately picking your campsite and/or group out of the masses

Keep this stuff in mind and I’m confident you will enjoy Bonnaroo as much as I have.