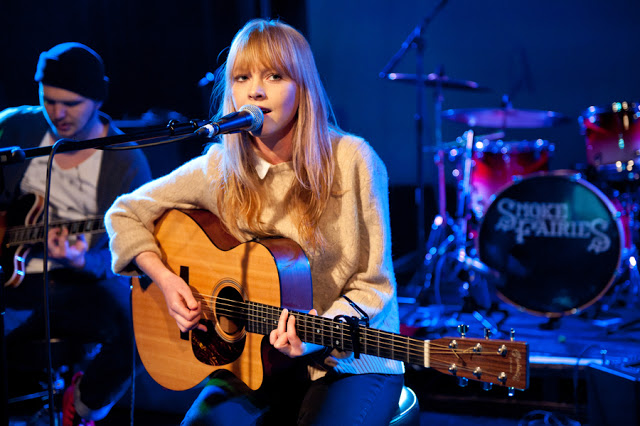 UK singer-songwriterÂ Lucy Rose is taking her band to many US cities this month, with a supporting slot forÂ City & Colour. They’ll be playing shows at The Ritz in Raleigh, NC on Sept. 24, Amos’ Southend in Charlotte, NC on Sept. 25 and The Orange Peel in Asheville, NC on Sept. 26. Be sure to check out this brilliant lineup at one of these dates. I interviewed her about her tour, new album, and festival experiences.

Yep, we had our 3rd show with them last night in Philadelphia and we are on our way to the 4th show in Washington, DC.

Has the tour been going well so far?Â

Yeah, it’s been awesome. I think the crowds have completely blown our expectations and actually listened to our music so it’s been really nice. This is the first time we have really experienced something like this in the US. It’s difficult with support show sometimes because you know everyone is there to watch someone else. They are not the easiest of shows, but these last days with City & Colour have been good because we’ve got really good reactions, touch wood.

How different are your fans in the US compared to yours in the UK?

I don’t know because I don’t know if I’ve actually got any fans in the US, that’s what I’m working on right now. Everyone in the UK is awesome but the US seems to vocalize their love a bit more, sometimes.

What has your previous touring experience in the US been like?

Well, we’ve had some headlining shows in New York and Los Angeles and those were pretty similar to what we get in the UK but these support shows have been really different because they are big venues and these people who have never heard of us before actually seem to be paying attention and enjoying the music. We might be winning over some people.

What were you doing before this US tour?Â

We’ve Â been doing festivals all summer and it was a really good experience. Other than Reading and Leeds being a bit rainy, the festivals were blistering hot which is pretty rare for the UK. This was my first time actually playing Glastonbury this year. I sung with Bombay Bicycle Club a couple of years back when they played which was amazing. But to be able to go back and play by myself, I was pretty surprised. It was one of those things that I definitely wanted to play. I would have been really gutted if we hadn’t. We were very lucky to be on the lineup.

Did you have a big crowd there?

We had a full tent, which was nice, as we were all very nervous and knew who we were up against. The thing about Glastonbury is that there are normally enough people to fill every tent. We had a great following there. Glastonbury has a certain energy, everyone just cannot believe they are there.

Do you have any interesting Glastonbury stories?

It was the first festival my mum had ever come to. I gave her the list of all my dates and asked if she fancied any of them and she obviously chose Glastonbury. She came and we went and watched a bit of Arctic Monkeys and a boy came up to her randomly and asked her for a Rennie. He said “I’ve got terrible heartburn, have you got a Rennie? Like, I’m dying.” And because my mum is a mum she grabbed out a Rennie and gave it to her and he said, “literally, I love you” and disappeared into the crowd.

Do you have any crazy stories from tour to share?

Well, I’m probably the least rock and roll person you could talk to so my stories just consist of Rennie and heartburn. Nothing too mad. None of us drink or anything while we’re on tour. We’re very tame. We’re pretending we all just came out of rehab to make ourselves feel better.

Did your guest spot on Lights Out, Words Gone by Bombay Bicycle Club help spark your career?Â

It definitely helped. It exposed my music to a lot of people who hadn’t heard of me before. It was a really good thing. I met them in a pub after one of their gigs and got chatting to Jack afterwards and things went from there.

Your new album Like I Used To has just come out in the US but has been out for a year in the UK. Is it strange promoting the album after a year of doing it, or are you still just as excited about it?

I’m still excited. We’re playing lots of new stuff as well; it’s a combination of both. I think I am really excited that the album made it out here because it was impossible to get it released in the US. The fact that it is out and is available is an achievement in itself so it’s exciting to be promoting it again in a new territory.

Are you working on a new album at the moment?

Yeah I spent some time in the studio before we came to America, just recording some new stuff and doing lots of writing. Hopefully when I get back I can work on getting the second one finished. There is definitely a development between the first album and this album. It’s a lot bigger sounding and a little bit rockier.

Are you listening to any bands at the momentÂ that you think people should be listening to?Â

All tour dates and music can be found on http://www.lucyrosemusic.com