But they’re all liars.

I know The Greatest Band You’ve Probably Never Heard Of and they’re called The Khrusty Brothers–a group I unashamedly discovered on Myspace at the impressionable age of 14. 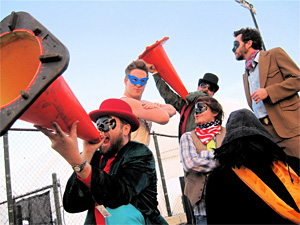 Their music is a glorious blend of everything perfect in music today–a clean, unique tone of voice, folk instrumentation mixed with drops of machine sounds, and gorgeously narrative lyrics. They are self-diagnosed “appalachian mourntronica.” But what’s even more riveting than their unprecedented music, is their story.

The Khrusty boys were particularly influenced by their father, Winston Khrusty, who taught the boys to play in his family band, Winston Khrusty and the Appalachian Mourners. Both Winston and wife Elmadora had passed away by the time the youngest of the brothers was just 14. Truly though, no one can tell the rest of The Khrusty Brothers’ story better than this and of course, this.

I hope they’ve been spending the last 7 years preparing a follow up. But in the meantime, if you’re rushing to Spotify now (which their names alone should make you do) I especially recommend “Every Time A Lie” “Whittle Down” and “On A Shelf.”

For more from The Khrusty Brothers and my four other featured artists, tune in to The Diagnosis on 90.5 FM in Columbia, on online at wusc.sc.edu.