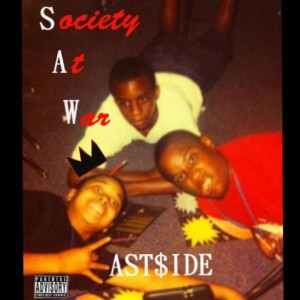 Over the weekend another installment of Sneaker feet firstÂ “Court Yard Sessions” took place in Charleston, SC and rapper Bennie Sav (also known as Ox) seized the opportunity to drop a new mixtape and perform. Over the past few months Bennie Sav has been hard at work on the follow up to his debut mixtape Who Am I? The new tape entitled Society At War or in shortÂ SAW, was released April 12th on the birthday of one ofÂ Bennie Sav’s life long friends who past away. The twelve track tape is a short and sweetÂ compilation ofÂ skits andÂ quality music that ridesÂ from beginning to end. It includes features from other members of PGE Mike Buford,Â Shellz, and Khidd P. Bennie Sav is proving to be superior lyrically and this mixtape isÂ the first time we’ve seen him bring aÂ clearly compiledÂ vision to life on wax. Setting himself apart from other SCÂ rappers he has anÂ intangible appealÂ at first listen and aÂ hunger that can be heard throughout his music. With the right formula his success could reach far outside the region. Bennie Sav has a story to tell find out what it is for yourself below.

The full performance footage fromÂ Court Yard SessionsÂ will be released soon and you’ll be able to watch it right here at SceneSC, until then if you haven’t checked out the mixtape check it out below. You won’t regret it.