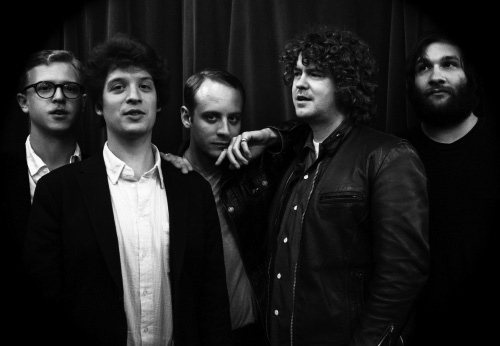 Since the release of their 2013 album Negativity, Deer Tick have been at an all time high as a band. The last two years have seen a serious turn from a hard partying group to a band more focused on their craft. A lot of that hard partying past has more to do with youth and growing up than anything else, but before 2012 you can’t track down an album review or article that doesn’t mention their wild lifestyle. Front-man John McCauley’s been relatively open about it all in interviews, and with the opening track of NegativityÂ he set a new tone. The public’s first introduction to the new record was a simple video that premiered close to a year ago focusing on McCauley’s face, more specifically his eyes. It was a bold statement that introduced the band to a whole new crowd that knows nothing of Pitchfork and drugs, but one that can appreciate an honest-to-self song. “The Rock”Â sets the tone for the new album and the new phase of Deer Tick.

With Negativity, Deer Tick prove themselves as skilled musicians, something that could have been lost on audiences before with loud amps and rough around the edges performances. Leading up to the releaseÂ Deer Tick played shows at Carnegie Hall and The Allen Room in Lincoln Center. Both venues that aren’t conducive to slamming whiskey shots and slinging beer cans, it was a true chance to for the band to show their chops to a listening crowd and show bandwagon media types a different side of the band. It seems to have worked. Negativity is an honest and emotionally heavy album that deserves attention for the subject matter and nothing else. McCauley tackles a broken engagement, his father’s tax fraud and subsequent jail sentence and his own demons with his substance abuse problem. McCauley has since wed pop singer Vanessa Carlton, who also sang on the album and occasionally performs live with the band as she did this past weekend at Shaky Knees festival in Atlanta, GA.

People took notice of the new album as the band did the late night TV circuit and received positive write ups throughout the blogosphere, also earning features in USA Today and Wall Street Journal. Now they’re on a more than year-long journey touring cities across America to support last years release, playing nearly every high-profile music festival on the way. Highlighted later this summer is the home state Newport Folk Festival in Rhode Island where they’ve become regulars, playing special sets each year where they bring in different guest performers. The circumstances in John McCauley’s life that led to the focus onÂ Negativity could never be repeated, but he captured them in a lightening-in-a-bottle type way lyrically, and created something positive out of the situations at hand. Now that’s something we can all cheers to.

Tickets for you and a guest to see Deer Tick and Langhorne Slim and the Law. Winner will be contacted 11 AM Thursday May 15 via email.
[contact-form-7 404 "Not Found"]