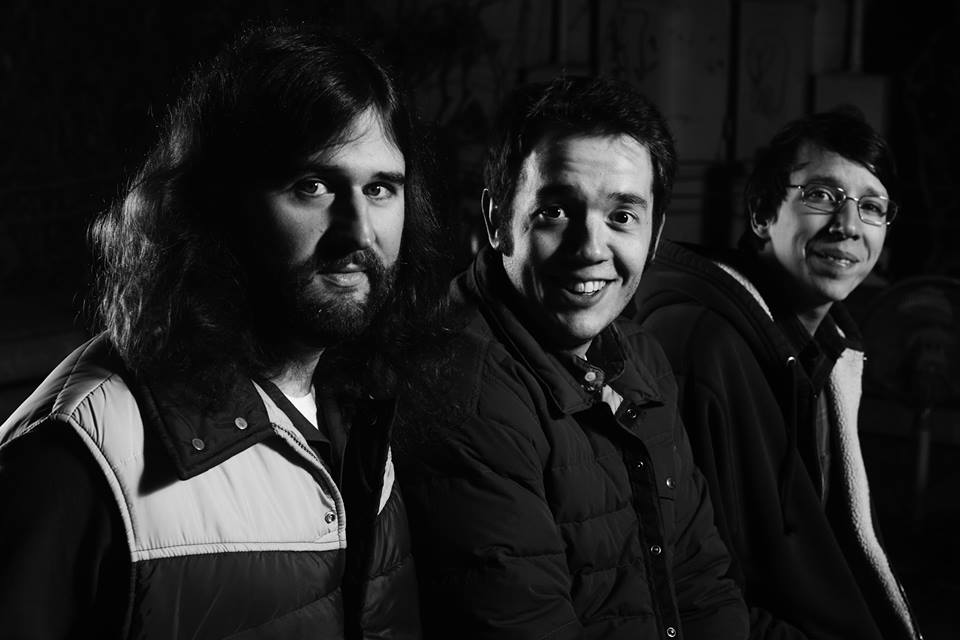 Amigo play The Royal American in Charleston 8/14 with Susto and Dear Blanca and New Brookland Tavern Friday 8/15 with The Restoration, Stefanie Bannister and Susto

“So I started this damn country band/Cause punk rock is too hard to sing” sings Ryan Adams at the end of the Whiskeytown’s song “Faithless Street,” the title track of their dÃ©but album. It’s a line that’s always stuck with me and seems to define alt-country in many ways. Faithless Street is one of the quintessential albums when it comes to the alt-country genre, a true mix of indie rock and pure country that seemed to be popping up in the tobacco fields of North Carolina in the 90’s. Amigo are no 90’s revivalist by any means, but their music flows from the same fount, grown from deep within the Carolina soil.

Amigo’s debut album Might Could touches on different genre bases with a wide array of influences overall. Live, the three-piece band lean towards a more classic rock sound, but on the record the honky-tonk and country influences really come out along with a slew of others. In the opening seconds of “Where Have all the Bad Times Gone (To)” a twangy roll of the ivory and the singing of a steel guitar welcome listeners with open arms – with that song title and those tones you’d think you were in country heaven. One thing that Amigo seem to have captured most on Might Could is the art of diversity from song to song without losing the ability to tie it all together. Just as the opening track pulls from country music staples, the next song pulls heavily from 60’s pop and Doo-wop. Later in the album “Oh, Easy Rider” is a straight Western burner with a perfectly recorded and written horn section.Â Might Could is filled with fine moments, but none are better than the couplet of songs “Old Testaments and Nail Bombs” into “Jud Blood,” a beautiful two-minute interlude in the middle of the album.

We caught up with Amigo frontman Slade Baird to chat about the new album and what they’ve got in store for the future. In addition to their show Friday night at New Brookland Tavern, Amigo will also be performing on the SceneSC stage at the State Fair this year and at Fall for Greenville, another event which we’re proud to be sponsoring. If you’re attending Hopscotch Music Fest in Raleigh, catch them at one of their day shows!

Your new album Might Could has been well received all over and is still going strong. Tell me a little about the recording with Scott Solter.

We had a really firm idea going in as to how we wanted the record to sound. We knew we were pressing vinyl and we knew that we wanted a really warm and classic sound, as high fidelity as a studio record should ought to be. We found Scott living in a corn field in Monroe, NC, just outside of Charlotte. A quick look at the guy’s resume and you know he’s a badass, so I called him and we talked about music and I told him about the band and what we were looking to do and he had time in his schedule (and this guy is always working) so we jumped at the chance to work with a guy who has worked on so many great records. He’s meticulous, but laid back if that makes sense. We felt very comfortable working with him and jumping right in and making big creative choices that would result in our first record it meant a whole lot to be able to just trust him to do his thing. He taught us a lot about the recording process because honestly we went into it pretty green. I had a big list of notes about the instrumentation and the kinds of sounds we wanted, but having a pro like Scott at the helm meant that we wouldn’t have to make a lot of mistakes to find the right sounds and it freed us up to just play and make a record we could all be proud of. Scott’s also hilarious and has a story for any occasion, so that made the sessions a lot of fun even during the parts of recording that aren’t any fun.

How long had you been working on these tracks before you took them to the studio?

We had been a band since 2011 and started recording in July 2012, so we had about a year of testing them in front of audiences and figuring out what kind of band we were before we went into the studio. We actually finished writing one of the songs in the studio. We had a long hiatus after the first session due to different personal commitments so we didn’t actually finish recording until New Year’s Eve. Then we had to wait for our schedules to work to mix, so that was in the spring of 2013. Then we had to save money and learn how to start a record label so that’s why it took a year and a half for it to come out, but the wait was worth it. Plus, we had some changes in the lineup and that was a setback, but now that the album is out and the band membership is solid and we’ve played almost 50 shows this year, I am happy with where we are right now and excited about moving forward and looking forward to recording again.

Amigo‘s style seems to move gently from song to song, but I like to think of it as a honky-tonk alt country album. Does that seem fair? What is Amigo‘s style to you?

I like “Honky Tonk Alt Country”! I think since we play live as a 3 piece we have a lot of classic rock’n’roll elements that come out. And the influences come from everywhere, we all like so many kinds of music. But when we started the band, I was definitely holding us up against all the great 90’s Alt. Country music that came out of American independent rock, hardcore, punk rock kids getting into country music. I steal from those people any chance I can get! Other immediate influences include 60s pop and 70s country rock. People like Bob Dylan and Doug Sahm. But we take inspiration from wherever it comes. We don’t want to be stereotyped too much and then have to disappoint anybody when we come out with our reggae album (I AM KIDDING)!

All year Amigo‘s been playing steady runs of dates. How do you balance it all with your other projects?

We just make it the priority. By the end of the year we will have done about 50 shows, which is not bad at all considering we still have day jobs and haven’t lost them (yet). I do play in another band called Motel Glory, but we just work around each others’ schedules. Amigo is definitely moving toward being a touring band so we just keep making the radius bigger and trying out new places. Last year it was the Carolinas and TN. This year we did a 2 1/2 week southeastern tour that took us through the Carolinas, GA, AL, TN and we even went up to NYC, Philly and Baltimore. We have a couple of festival type gigs coming up and we’re playing some day parties at Hopscotch and then it’s back to playing as many small club gigs as we can before the end of the year. And then next year we figure out how to do twice as much. Part of my selfish, personal goal of starting a band was to see America with my friends. So, for all the bummer shows you end up playing where nobody is there, I asked for it and it’s worth it.

Might Could seems loose personality wise in a great way, but always stays tight musically. Was this something you were actively going for in the recording?

Totally – We work hard to make our recordings sound as “professional” as possible because we believe in the songs and we want to give people their money’s worth – the live show is a different story because having fun trumps sounding like the record live any day. But we also have fun playing the songs and so there’s an undeniable energy that comes across (because we do have so much fun and actually like all the songs and playing together). We were absolutely going for that kind of sound, but I think it’s just the kind of music we make, rather than an intellectual decision making process. We might have something to say if you want to dig into the lyrics, but we want hearing our music to be a joyful experience. Dancing is encouraged!

Lyrically speaking, what’s the songwriting process for you. Is there some light that turns on for you or maybe you hear a great story and turn it into song. What’s it like?

Songs are always a total surprise. I don’t know where the hell they come from and I try every day to figure that out. Sometimes they will pop up and I will know that they have been growing naturally from some experience in my life. Sometimes I will remember a story that I read or a book that I read and it will spark a song. Sometimes it’s from the news or real people or friends or enemies that I really know. Sometimes I will just hear a song and say, “I want to write a song like that.” But the best ones come out of the blue. I write stuff down all the time and sometimes it ends up being part of a song that comes together later. Like “Where Have All the Bad Times Gone” was me trying to write a Silver Jews song. I started playing chords and singing real low and the chorus just came out. Then when I started working on the lyrics, I felt like it needed more of my own personality, which is a little more in your face than David Berman’s delivery, so I started singing it an octave higher. Those lyrics are real personal and came from actual personal experiences. “Best Laid Plans” was written one day when I was reading a book about Doug Sahm. I got to the end of a chapter and was letting it sink in and I thought to myself, “If I were Doug Sahm, what would I be doing right now?” and the answer was writing a song! So I got up and got my guitar and then what came out doesn’t sound like Doug Sahm, it sounded like me trying to be Jonathan Richman and then the lyrics are about some pretty dark shit but I tried to give it some humor and turn the bad stuff into something good.

What’s on the horizon for Amigo?
On the horizon, I touched on it in an earlier question, but the big thing is doing more. We did a lot this year and I’m proud of us and the places we have played and the opportunities we have had, and we worked our asses off (and we’re booked through the end of the year) but next year we have to work twice as hard, play twice as much and, hell, have twice as much fun, why not?