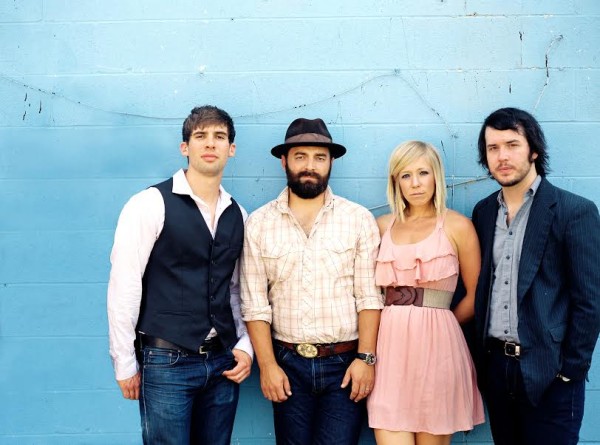 Drew Holcomb & The Neighbors hale from Nashville, but will find themselves in the Lowcountry on Friday night when they play at Charleston Music Hall. The band is currently on tour in support of its newest studio album,Â Medicine.Â Released earlier this year, the album finds Holcomb and company crafting the same honest, folk-tinged music that led them to such a successful career. And that successful career can be tracked back to the band’s 2011 release ofÂ Chasing Someday,Â which landed the band a spot on the Billboard 200 and multiple television spots.

And while many bands let success direct their music, the Nashville-based group seems to have resisted the stigma and kept progression in mind withÂ Good Light. Released in 2013, the album presented a renewed band taking a new approach with its music. With less rock and roll and more acoustics, the album landed at No. 5 on the US Folk chart. But it’s the band’s latest album that fans can expect to hear from the most tomorrow night. Â

We chatted with Drew Holcomb about touring, Medicine,Â the upcoming show in Charleston, and what it was like dressing up like a banana.Â

Andrew: You just got back from a short series of shows in the U.K., do you have any stories you’re willing to share from the road?

Drew Holcomb: Yeah, it was really a great tour. It was the second time we got to go over there and we got to headline almost every market we went to. I don’t necessarily have any crazy stories per se, but it was kind of a quick tour. But anytime you get to play your music for a new audience, especially an overseas audience, it’s really kind of surreal that they know your songs and are singing along. It was kind of a back to basics thing for us. It was just me and Nathan, our guitar player, and we were playing these small folk clubs with a 150 capacity on average and they mostly sold out. Anytime you’re driving on the left side of the road, you feel like you’re going to die all week long.Â

Andrew: And with that said, how was the first show of the U.S. tour last night?Â

Drew Holcomb: It was great â€¦ we were in Oxford, Mississippi … a college town, and had a great crowd. The first show is hard to enjoy because your just trying to remember all the new music. So you have to be on your toes quite a bit. Once we get three or four shows under our belt, we’ll all feel a bit more comfortable. With that being said, it was probably the best first show on tour we’ve had.Â

Andrew: Medicine was just released in late-January, how has the response been so far on and off the road?Â

Drew Holcomb: Around half the set is from the new record. And since its been received so well and been selling so well, it’s really cool to see people already knowing the new songs. I think some of that has to do with some of the videos we made that have been out a little bit longer than the record. We also have a very loyal fan base and when we release a record, a lot of people go get it immediately and start living with the songs and living with the record. So by the time we get to town, those songs are not new, they’re pretty familiar for people.Â

Drew Holcomb: I think it was a really organic record. We had a lot of fun making it and we didn’t second-guess ourselves a lot. Because we recorded quickly, we focused a lot more on the music and less on the process of sounds and engineering and kind of let the music determine the pace of making the record instead of any electronics. That made the process a lot more fun. It moved quickly, but not rushed in any way. We got to really enjoy playing the songs over four or five times and then add some things to it or take some things away. And we worked on one song at a time until that song was finished. So it felt like a complete process in a way that we’ve never experienced before.Â

Andrew: In a CharlestonGrit.com interview, you said that you “never wanted to be a songwriter who was too inward gazing.” Would you say that still rings true for the music on Medicine?Â

Drew Holcomb: Yeah, there’s a way to make your songs and records really personal without being selfish, which I think is a great way to think about it. I do obviously use my life and my experiences to set the table for my songwriting, but I always hope that the songs hit home and mean something to a lot of different people … not just like somebody reading a memoir. It’s really like reading a good story that has a lot of universal appeal to it. I think Medicine is the best version of that I’ve done so far.Â

Andrew: Do you have a favorite lyric or song from this album?Â

Drew Holcomb: There are a lot of moments I’m really proud of. I think the one that defines the record is a line in the song, “Here We Go,” and it says: “Music it makes you feel good, makes you feel you understood, like you’re not alone, like you’re not a rolling stone, you’re not the only one on the road.” And I think for me this record is really about giving people a little bit of something to hang onto. Whether that’s family, somebody they love or ideas of growing older. These kind of themes I think people can hold onto and give them a little glimpse of a little bit of hope in a world that can be pretty miserable. Especially if you watch the news a lot. And I think music is a thing that reminds people that they’re not alone and I hope that’s what this record does for some people.Â

Andrew: So what’s going on in the music video for “Here We Go”?Â How did the idea of dressing up like a banana and a polar bear come about?

Drew Holcomb: Well â€¦ when we finished the record, Nathan Dugger, who’s in the band â€¦ we were talking about music videos and he said, “Well, you know Drew â€¦ a lot of our music videos are all pretty serious.” I took that as a challenge and I had heard about this costume place in Nashville that had these amazing costumes. So I just went there to try and get some inspiration, and I finally decided to get like 30 of the most random, outrageous, and absurd costumes and just build a video around us wearing them. I think a lot of our fans see me as this pretty stoic personality and I’m actually pretty light-hearted as well. And I kind of wanted to reveal that to the world and the response has been great. I think people really think it’s fun and absurd and that’s exactly what we were aiming for.”Â

Andrew: What can we look forward to for your show at Charleston Music Hall on Friday?

Drew Holcomb: We just hired a full time keyboard player who plays the organ and piano, and sings. And that’s really added a new dynamic. So we have full on, four part harmonies now. As we’ve grown as a band, we’ve allowed ourselves a lot more freedom on stage to kind of stretch out and enjoy the songs and not just play them like the record. A lot of the songs will feel similar to the record, but we don’t feel limited to that. I think our show is just an exercise in classic songwriting performance. There’s not a lot of tricks, or big light shows, and there’s not a bunch of props. We just get up there and play our songs and hope that people enjoy the music and to have a moment with the crowd.

Andrew: You’ve played a couple shows in Charleston through the years, would you consider it a favorite touring spot of yours and why?

Drew Holcomb: Yeah, I love Charleston. A lot of it has to do with just being in an historic city center that has a lot of culture and the weather is usually pretty great. I have some good personal history there too. I took my wife on a date there when we were first getting to know each other back in college and I have fond memories of the city because of that. And my friends in Needtobreathe live there, so it’s a great town to visit and be with people you know. The crowds in Charleston so far have been good to us. I think it’s only our third or fourth time coming there, so we hope to make it a regular stop.Â

Andrew: As soon as this tour ends, you’re heading back out on the “Tour De Compadres” with Needtobreathe. How did you meet the band and become friends?Â

Drew Holcomb: We toured with them and opened for them a couple of years ago on “The Reckoning Tour.” I was a big fan of their music and a friend of mine who used to work for them as a guitar tech gave them my record, “Chasing Someday,” four or five years ago and Bo really liked it and reached out. We ended up playing a festival the same day as them and we ended up hanging out and really hit it off. And then they asked us to go on tour with them and we’ve been close friends ever since.Â

Drew Holcomb: We’ve got a Husk in Nashville. And we ate at the original Husk in Charleston the last time we were there and it was great.Â

Andrew: Favorite venue of all time?Â

Drew Holcomb: Both. Well â€¦ digital, but if I really like it I’ll get it on vinyl.Â

More about the show:

Who: Drew Holcomb & The Neighbors with special guest Angeleena Presley

When: Doors open at 7 pm and show begins at 8 pm