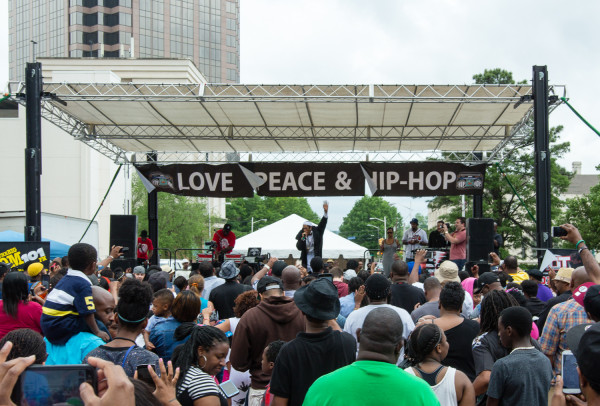 “Hip-hop was created in New York City to give a voice to an unrepresented group and helpedÂ unify culturally-diverse groups in the city,” said Darius Johnson, more commonly known as FatÂ Rat Da Czar; “We have a similar vision for our festival, and we hope it can work to give aÂ unifying experience to generations, races, neighborhoods, families and whoever else wants toÂ join in on the fun.” What started out as a conceptual seed in Fat Rat Da Czar’s mind over threeÂ years ago has branched out as a well-nurtured tree rooted in the center of Columbia, SouthÂ Carolina. Columbia’s hip-hop family day is a free, family-friendly festival that seeks to upliftÂ and support the community using hip-hop music as the channel to deliver a message of peace,Â love, and unity. ‘Culture’ can be defined as “The arts and other manifestations of humanÂ intellectual achievement regarded collectively,” and ‘Community’ can be described as “A feeling
of fellowship with others as a result of sharing common attitudes, interests, and goals”. TheseÂ two ingredients form the basis of Love, Peace, and Hip Hop, and that is why this festival hasÂ become such a success. The third-annual Love, Peace, and Hip-Hop festival occurred on AprilÂ 18, 2015 on Main Street from 11AM-5PM.

All of the contributions and money earned from water and soda sales were donatedÂ to two local,Â non-profit organizations: the National Alliance for Mental Illness and Going Forward at GableÂ Oaks, (which is a current project of the Eau Claire Promise Zone). Sherard Duvall, one of theÂ festival’s organizers, said, “We created this festival to help break down some of the stereotypes that surround the hip-hop culture, while also uplifting the community. Love, Peace, and Hip Hop is rooted in family, education and giving back to the community, and we work really hard to make sure this festival reflects those values.”

Our president, Barack Obama, said, “Yes, our greatness as a nation has depended on individual
initiative, but it has also depended on our sense of mutual regard for each other, of mutualÂ responsibility. The idea that everybody has a stake in the country, that we’re all in it together and everybody’s got a shot at opportunity. Americans know this! We know that there are some things that we do better together.”

I firmly believe that Love, Peace, and Hip Hop is an ideal exemplification of these words. ThisÂ festival is a well-needed source of community-gathering for Columbia. It is an idyllic model ofÂ notions that are needed to be put into application; so that a legacy of Columbia’s Hip HopÂ industry may be formed. I commend all corporations that have invested their time, faith, efforts,in the hip-hop movement of South Carolina. Supporters and sponsors for Love, Peace, and Hip Hop 2015 include: HOT 103.9-93.9, DTLR, Well Care Health Plans, Healthy Connection, Columbia Music Festival Association, and Nickelodeon’s Indie Grits Film Fest.