by Joshua Sorrells
in Fall for Greenville
0 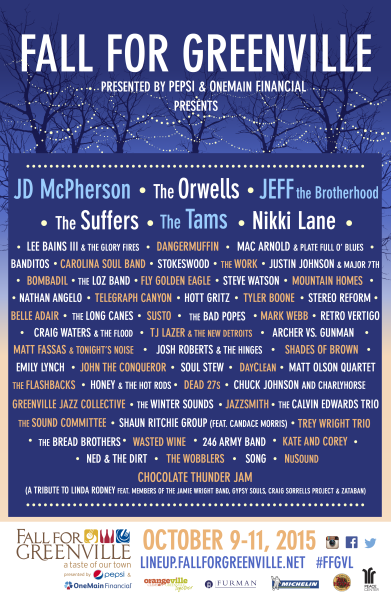 Fall for Greenville kicks off Thursday October 8th with The Suffers and Nathan Angelo.

It’s that time for Greenville, SC again. The changing of seasons ushers in cool, breezy evenings accentuated by the wafting smells of wonderful food and, carried by the thick autumn air, melodies from both local and touring artists. I’m talking about Fall For Greenville.

As always, there’s going to be great food and beer to enjoy (and we should take advantage of it all) but what we’re really all going for is the music. FFG has created quite a reputation for itself with acts like Dawes, Deer Tick, Kopecky (formerly The Kopecky Family Band), and SC native duo Shovels & Rope among a rather long and impressive list. And so of course we’re looking forward to what’s in store this year.

Headliners include the Midwest’s JD McPherson and The Orwells as well as JEFF the Brotherhood bringing authentic rock and roll straight from Nashville. But what I’m most excited about is Nikki Lane’s return to Greenville. Her vintage, nostalgic country tunes recall a time when life was simpler (I’m talking about our granddaddy’s America) and create a dreamscape of southern utopia where the food’s great, the whiskey flows like rivers, and the love is real. She’ll be on the mainstage on Sunday so grab a beer and a plate of food and take a step back in time with me and Nikki.

Among other local acts is Charleston’s Susto, a great indie-folk band risen from the ashes of Sequoyah Prep School. They’re on track to explode very soon with a track record of opening for acts like Iron and Wine and Ben Bridwell. They’ll be playing Sunday as well and I’d encourage you not to miss it.

A former SC-band is making their return home this year as well. Ned Durrett and his newly formed, west-coast Dirt will be playing on Saturday. It’s been a few years since Ned has been in SC and now that he’s successfully funded a new record he’s spreading his dirt all over the country. They’re another SC (now CA) band to watch out for.

It’s a great lineup this year and there are plenty of artists to choose from. Don’t make a mistake and miss any of it. You’ll regret it, I promise.