Interview with Lowland Hum | A Brief Escape From Life

by Joshua Sorrells
in Interviews
0 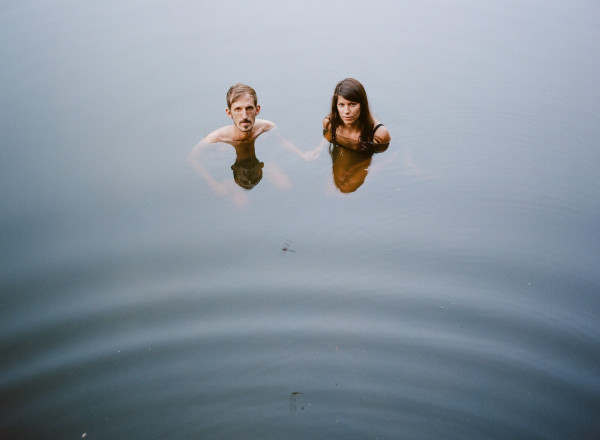 I’m sitting at my desk in my home office right now. There’s a window to my right and outside it’s raining, that kind of slow, soft rain that literally creates a mood. It dampens every emotion swirling inside me so that they blend together into one surging force of need. Maybe it’s something you’ve never experienced, but it’s a bit like this: your entire existence, it gets buried, pushed down under layers and layers of some invisible blanket and you feel like you’re suffocating, like you’re being pushed into nonexistence and so you need something, anything, to pull you out.

That’s what Lowland Hum’s new self-titled full length does. It reaches far into the abyss and pulls you out, slowly and softly. The reprieve of magical hums in “Charleston” create a weightlessness, a safeness like air. The tidal-like chorus of “Rolling and Rolling” rocks you into a waking sleep until before you know it you’ve resurfaced again.

This married duo brings to us the magic that only music can. It’s why songs are written, why we listen. I was fortunate to have the opportunity to ask them some questions re their process, influences, and interests that define them not only as artists, but as people.
____

You two have a wonderfully interesting origin story–and I’m sure you either, A, are tired of telling it or, B, take great pride in its telling, but–could you guys tell us how Lowland Hum came to be?

We aren’t tired of it at all. The fact that we are married is integral to what we do as Lowland Hum. A little before we were engaged, I (Lauren speaking here) reluctantly sang on a few recordings of Daniel’s songs at his request. Once we got married, we decided to give music as our full-time job a try. At that point I was just singing background harmonies on Daniel’s songs, but we began changing their arrangements to include me more, and then we began songwriting together. We noticed the music was really changing and so our collaboration, Lowland Hum, was born.

It’s got to be an interesting dynamic with you two, when it comes to songwriting. There are so many things being brought to the table (your separate lives, your married lives, your different backgrounds in visual art, etc.). Can you take a moment to shed some light on exactly how that process plays out?

It is different every time, but when one of us has an idea that is starting to take form and build momentum, we try to invite the other into the process as quickly as possible. It is important to us that we both feel represented in our songs. We both bring different things to the table, and I think the songs often turn out more complex as a result of passing through the combination of our individual vantage points and creative inclinations.

You Â just released a new record (Lowland Hum), which is your second full-length. It seems to be a more refined project than your first full-length (Native Air) in that it’s not your typical singer-songwriter type of record. Is that deliberate or is that just something that happened organically, this being your second record?

It all happened in the studio. The songs all came into the studio sounding more or less singer-songwriter-y but when it came time to record, many of them just seemed to require more before we felt that they were complete as recordings.

You have received a lot of praise for the sincerity of your lyrics. Where do you go to for material? These songs are so honest. Are we to assume every song is an introspective look into yourselves as individuals? Or have you taken creative freedom in imagining situations like those in “Rolling and Rolling?”

Much of our material is pulled directly from our lives. A lot of this recent album was the product of us trying to process the past year, which was spent mostly on the road. It was a beautiful year, but also pretty overstimulating. Oddly enough, a lot of childhood memories were surfacing as well. Some of our songs draw from other people’s stories or things we’ve read or watched, or are fictional imaginings, but when you are writing something, parts of yourself are inevitably going to find their way into the finished product. The scenes in “Rolling and Rolling” were pulled from Daniel’s childhood.

What music are you both listening to right now? Do other artists inform your own songs?

Certainly other artists inform what we make, although it is mysterious and often hard to say exactly how. We are on tour right now. Most afternoons we hit what we like to call “the 4 o’clock slump,” which often coincides with when we are needing to get geared up for the evening’s events. Lately a little bit of Courtney Barnett or Modern Lovers has been the perfect cure.

When you aren’t writing or touring, what are you doing? What are the things, outside of Lowland Hum, that you two are passionate about? Do these outside passions make their way into the music somehow?

In between tours we are usually putting together the pieces for upcoming tours. Booking shows, finding lodging in every city, and handling what promotion we can on our end can all easily take up more time than we have. It is never ending and can be all consuming. We have to be pretty diligent about setting aside time for writing. When we have free time at home we really enjoy reading outside on our roof, heading to secret swimming spots in town, or catching up with friends. Because we are home so little, I (Lauren here again) try to get in as much domestic stuff as possible (trying out new recipes, reading about gardening, tending to my little potted plants, identifying the new birds in the trees outside our kitchen window, cleaning – it’s amazing the things that feel luxurious when most of your time is spent away from the home). I think a longing for home and for some deep sense of internal settledness (which may not actually be obtainable) finds its way into our songs.

You create a very ethereal, intimate atmosphere for your live performances. What’s the thought process behind that? How does this atmosphere, in your minds, lend to an audience’s experience? How does the atmosphere lend to your experience of performing?

There are so many distractions in a day. We love the idea of building a space that is set apart for audiences to enter into. It began as an attempt to engage audiences on as many sensory levels as possible. But I think it has evolved into just wanting to create moments of presence, a place for people to be together, without distraction. I am not sure if our approach has anything to do with it, but we are really affected by the atmosphere created by the combination of all the people in the room. We always give our best but when audiences are expectant and eager to interact, it feels like so much more is possible in a performance.

If you haven’t taken the time to listen to their new album you can find it on their website (provided below). Do yourself a favor and make Lowland Hum a part of your life.

Nique The Geek – “Geek On This”